Well that was fun!

I went into last night’s game perfectly content with a 7-1 start against the Yankees.
And with the score 3-1 in the 8th I thought “Well, we won the series and Sabathia is on his game.”

Folks, that is the definition of a Dodged Bullet Game!

A victory when you were resigned to failure!

I am not putting the Wednesday night game on here even though it was a 1 run win. The Red Sox had a 6-2 lead and basically avoided a teeth grinder. My rules… deal with it.

Let’s update the board!

Back on top of the Division.

Back with the best record in the American League!

They are saying “big picture” so often that you’d think they were a bunch of art history students who came back from the Sistine Chapel.

The big picture is it is only 3 games and that there are 102 games left in the schedule and its only a 2 game deficit… blah blah blah.

Well there are some other aspects to the big picture that can’t just be swept under a bumpy rug.

Yes it is early, but it isn’t THAT early. The season is more than 1/3 of the way through. This isn’t April… it’s mid June. And before you know it it will be July.

CC Sabathia has been good, but not on anyone’s short list for Cy Young contenders.

A. J. Burnett has gone back and forth between mediocre and terrible.
Andy Pettite has been underwhelming.
Joba Chamberlain has shown flashes of brilliance but is a #3 starter at best now.

And Chien-Ming Wang is so terrible this year that I am sure Brian Cashman is thinking of ways to get him injured again. It’s interleague! Why not have him run the bases again?

(Remember how everyone said that Wang would be back no problem because his injury wasn’t pitching related? Oh well.)

It’s been a year since Wang last gave the Yankees 5 innings in a game and this year his 0-4 record and 14+ ERA doesn’t lie.

Meanwhile Mariano Rivera is still great but that 3.20 ERA isn’t as eye popping as it used to be. And the middle relief is causing Mike Francesa to scream about Joba in the bullpen even louder.

(Losing a game in the 8th inning to the Red Sox will do that.)

And now they have Phil Hughes doing the bullpen/rotation shuffle because that worked out so well for Joba.

But would you rather have Hughes doing that or count on Aceves, Veras and Robertson?

To be fair, before last night Aceves pitched well and Robertson has been effective as well… but are the late innings of a potential pennant contender really going to be protected by Aceves and Robertson?

As I wrote before, it is inexcusable that Brian Cashman has an extra $65 million to throw around and has depth as an issue, but I digress.

More than a third of the season has passed and the Yankees have given their chief rival an 8 game head start on the season series. Remember that is more than a psychological edge. In 2005 the two teams finished tied but both made the playoffs. The Yankees were declared division champs based on their 10-9 head to head record against the Red Sox.

And the Yankees had every reason to believe they would win this series. Yeah Beckett has been great, but wasn’t he due for a let down?

Shouldn’t Wakefield have been a pinata?

Isn’t Penny vs. Sabathia a mismatch?

With A-Rod and Teixeira both healthy and smacking homers, shouldn’t the Yankees have done better than 3 runs total off of those three starters?

Had the Red Sox won one more game, they would have played the Angels at home to start the playoffs instead of the eventual champion White Sox on the road.

And more than a 1/3 of the way through the season, the Yankees have played 16 games against teams currently in first place and lost 12 of them.

Granted, that 4-12 record is heavily skewed because of the 0-8 record against the Sox… but a stat like that shouldn’t come up for a team thinking of winning it all.

The pitching is shaky, the line up can be subdued by good (not even great) pitching, the roster is old and more at risk for injury as the season goes on and they are playing .250 ball against division leaders… and it isn’t THAT early.

The Magic Number for the Red Sox 101!

And they need to go 2-8 against the Yankees the rest of the way to win the season series. 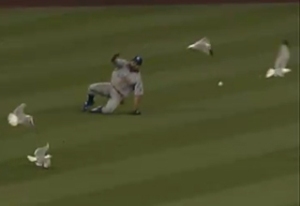 First you have the Midges swarming Joba Chamberlain, costing the Yankees game 2 of the 2007 Division Series.

Then you have the Indians winning a game last night with a ball deflecting off of a gull.

With all the help from the animal kingdom, you’d think the Indians would have a little better karma.

Oh well… I can’t believe I am the only one who saw that highlight last night and wasn’t humming this song.