How can they have an advance scouting department?

3 of their last 4 games they have been stymied by pitchers they have never seen.

The immortal Fernando Nieve… the guy who couldn’t keep a spot on the last place Houston Astros… making his first start since 2006… throws 6 2/3 innings of 4 hit ball in Yankee Stadium for the win.

If the rain lets up today, someone named Craig Stammen will pitch against the Yankees this afternoon.

Seriously, nobody can look me in the eye and say “Yes there are advanced scouts doing their job for the Yankees.”

There might be guys with expense accounts going to the games, but I they aren’t paying attention.

How do I get that job?

I’d love to be paid to fly to games and then do nothing to help the Yankees!

I would argue that James Lamar “Dusty” Rhodes hit the most underrated home run in baseball history.
The 1954 World Series was supposed to be a cakewalk for the Cleveland Indians. They won 111 games, an AL Record, ended the Yankees 5 year reign as World Champs and took on a seemingly overmatched Giants team.
Now any baseball fan worth their weight in tobacco knows that Willie Mays made the amazing back to home plate catch off of Vic Wertz in Game 1.
But the game went into extra innings and without a Giants win, Mays catch would have been an interesting footnote. (See Endy Chavez)
With 1 out and 2 on in the bottom of the 10th, Durocher sent in Dusty Rhodes… a guy who couldn’t play the field and seemed like a limited talent… but had a knack for the big hit off the bench.
He got it. Granted it travelled about half the distance as Vic Wertz’s out… but it was enough to be the second Walk Off homer in World Series history. And he did it off of future Hall of Famer Bob Lemon.
The Giants won the opener. And then with the Giants trailing in Game 2, Rhodes came off the bench again and tied the game with a pinch hit single off of Early Wynn, another future Hall of Famer.
In Game 3, Rhodes once again came off of the bench and delivered. This time he singled home a run off of Mike Garcia (not a Hall of Famer, but he was an All Star and a 19 game winner in 1954, so he wasn’t exactly a slouch.)
The Giants ran up a 7-0 lead in Game 4 and Rhodes wasn’t needed off of the bench, but his final numbers were amazing.
He batted .667 with an OPS of 2.381. He finished the series 4-6 homering twice and driving in 7 runs all together without starting a game.
They didn’t give out World Series MVPs in 1954, but no doubt he would have won it.
The Giants haven’t won the World Series since 1954, but I know one fan who can recite that roster and the events of the World Series as if it were yesterday.
My dad loved and still loves the 1954 team… and with Rhodes’ heroics they were not just footnotes!
If not for Rhodes then the Giants would be looking back at 1933 as their last title.
Rest in peace Dusty.
And don’t let anyone up there tell you that was a cheap homer!

In honor of Dusty… watch this great World Series film for the ’54 series! 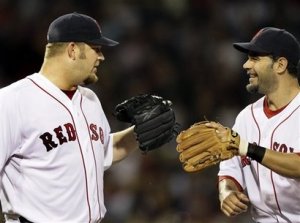 The Red Sox picked up a big burly guy who gives his team a chance to win, seems like a good guy to have in the clubhouse, has a winning record and has October experience.

And he is rumored to be dealt before you finish reading this sentence.
Yes I know John Smoltz looks strong and Clay Buchholz is waiting in the wings…
But why is it such a tragedy to have a lot of pitching?
When was the last time you heard a contender grumbling about having TOO much pitching?
What are we trading for at this point?
A shortstop? Nick Green has been playing well, Jed Lowrie is about to come back and even Julio Lugo has had a few good games recently.
An outfielder? I’m fine with Bay/Ellsbury/Drew with Baldelli and Kotsay in reserve. (And Jonathan Van Every in Pawtucket.)
A hitter? Well it looks like Papi might be finding his groove. And one of the reserve outfielders can start and Drew can DH if necessary.
A catcher? Varitek and Kottaras are doing the trick fine right now.
So where is the glaring need for a trade right now?
Why not hold off, have the horrible problem of a lot of pitching and see if there are any major injuries down the stretch?
Then again, at this point I just trust Theo.
If I woke up tomorrow and saw Theo dealt Pedroia for a Class A reliever I never heard of, I’d have to say “Well, he knows what he is doing.”