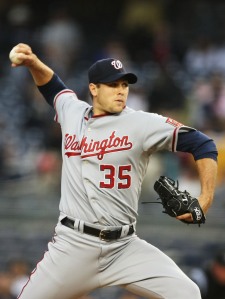 The other day I wrote that Craig Stammen, he of the 0-2 record and 5.86 in 5 career big league games, would come into Yankee Stadium and throw a perfect game because the Yankees bats turn to jelly when they face a new pitcher.

It wasn’t a perfect game… but 6 1/3 innings of shutout ball with no walks and his first career victory is nothing to sneeze at.

Holding A-Rod to zero hits in three at bats is pretty impressive although these days not such a rare occurance. (A Rod would finish 0-4.)

So once again… the existence of an advance scout for the Yankees can not be believed and a team that could rank as one of the worst in the history of baseball came into Yankee Stadium, took 2 of 3 and had three virtually unknown starters shut the Yankees down.

And despite my critics implication that Sharion Martis shouldn’t be included among the unknown and the lousy, I will disagree.

He was unknown in Yankee Stadium and his ERA would have been a decent credit score. A top line up in a band box ballpark should get more than 1 earned run in 6 innings off of him.

And before I am accused of not doing my homework… yes I know Craig Stammen, the pride of Versailles Ohio, put up good numbers in A and AA ball in 2008 and looked solid in Syracuse at the beginning of the year. But he was a struggling rookie in search of his first win.

A pitcher like that should get his first win pitching in a pitchers park like Petco against a lame hitting team like the Padres… not shut down the supposedly powerful Yankees.

Tonight the Yankees face Sean West… a rookie who has pitched 5 games in the bigs.

How could the Yankees POSSIBLY beat him?

I can’t imagine .212 is such a great batting average for the center piece of the Yankee line up. But that’s where A-Rod has dipped.
Whether it is his hip or anything he is no longer putting in his body… that is an average that you’d expect from Cody Ransom. 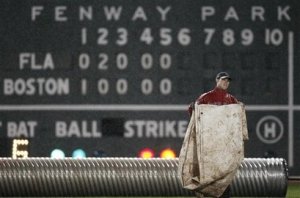 Really… thanks a bunch.

You couldn’t let the rain ease up for ONE inning!

The Sox were down 2-1 in the top of the 6th… and safe to say there was more than enough time to score one run.

Lester was settling in! Youk could have homered again!

There was more than enough time to complete the sweep of the Marlins! Don’t get me wrong, I am fine with 2 out of 3 against anyone… but still!

Why start the game if it looked like it was going to get washed out?!!!

Look at me.
I’m grinding my teeth!

I guess by definition this was a teeth grinder. And it is no fault of the Red Sox, but if they miss the playoffs by a game, I’ll be thinking of this game!

OK, better add it to the tally.

Back to even. Yeah it isn’t fair, but the regular season has no pity!

Onto Atlanta… try to win our 5 series out of 6.