According to Google Maps, it is 38.1 miles between Oriole Park at Camden Yards in Baltimore and Nationals Park in Washington DC.
Perhaps it is appropriate that they are so close to each other because they are both many more miles away from the pennant race.
Let me put it this way… the Governor of South Carolina is closer to his Argentinian mistress than these teams are to meaningful games.
So I can’t think of a reason to go to an Orioles-Nationals game this weekend in Baltimore, except maybe if you are an Orioles fan you might have an outside chance of seeing your team win.
Let me tell you… if you show up to this series, you never have to prove your loyalty as a baseball fan ever again.
The Orioles should award every single fan this weekend with a special prize.
I’m not talking about something from Boog Powell’s BBQ.
I’m talking about every fan gets to spend a weekend WITH Boog! 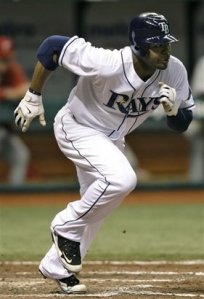 The attendance in Joe Robbie Stadium, or Pro Player Park, or Dolphin Stadium or Landshark Park or whatever the hell it is called now, was pathetic when the two teams met up in late May.

But I expect the Trop to be full.

Remember when people would complain about how the Florida teams should be contracted and that they are a joke? Well guess what? Both teams are exciting and worth watching!

The Marlins are on a roll and are only a game out of first place. You read that right… there is a statistic possibility that the Florida Marlins could be tied for first place by the end of Friday.

The Rays are the defending American League champs, have won their last few games. And thanks to a few winning streaks in June they have turned around their season and are only 2 games behind the big payroll Yankees for the Wild Card.

Both teams have winning records!
The Marlins and Rays have met with winning records in 2004 and last year. Those are the only other two times.
This could be the time that Florida’s place in baseball finally becomes something bigger than a joke.
That’s right. I said a joke. This obnoxious Red Sox fan will say it.
Florida is looked on by the rest of the baseball world as a place where you can watch baseball in Spring Training and then the fans disappear.
You don’t like that? Then show up! Show some life! The Marlins and the Rays are filled with some of the most exciting players in the game… and players who are all but certain to skeedaddle when they ask for more than minimum wage.
Show up! Ring those cowbells. Make up some thing for Marlins fans to do.
Make it so a dude showing up to the Trop with a Marlins hat on has people say “Man, you are brave to wear that here!”
I’m not saying start fights… just have enough fans to have people wonder if a fight is possible.
No excuses for anything less than 30,000 a game.
What else do you need?

As “Debuts of future Hall of Famers for your team” goes… tonight was terrible.

The game was out of control early, but it still was a loss to the NATIONALS.

The only thing that keeps this off of the Teeth Grinder list is the Red Sox won the series.

Off to Atlanta… hopefully to win their 6th series in a row.