I can’t help but wonder about all the people screaming for Mannywood now and cheering him on.

I have never been shy about expressing my disgust at the Yawkey family.

As a Red Sox fan, I have nothing but venom towards Tom and Jean Yawkey, the two who controlled the team from 1933 until 1992 and then kept it in the family until 2002.

They controlled it for a period of time when the Red Sox won a grand total of zero World Series and decided not to be pioneers of integration and instead kept the stench of racism (and an inferior product) hovering over the Sox until both were long dead.
But I already slammed the Yawkeys when I openly questioned the sanity of Red Sox fans for HONORING him!
And I did so again when saluted Pumpsie Green.
But a throwaway comment I made in my Home Grown vs. Acquired post for the Dodgers has given me a great moment of pride.

After praising former Dodger Dixie Walker who came to terms with his racism and was turned around by the greatness of Jackie Robinson, I talked about Reggie Smith.

“Well we go from Dixie Walker’s eyes being opened to the wrongs of racism to Reggie Smith… a product of the Red Sox farm system.

The Red Sox had a switch hitting, power hitting All Star Gold Glove winning outfielder with speed… and they traded him.

Hmmmm. Why would the Yawkeys trade a player like that?

Smith became a staple in the Dodgers line up finishing in the top 5 of the MVP two times and hit three homers in a losing cause in the 1977 World Series.

If only Tom or Jean Yawkey had a Dixie Walker moment. (Then again Yawkey was the one who turned down Willie Mays.)”

Not my greatest passage… but I can never resist slamming the Yawkeys for what they did to my team all of those years.

Well friends, I checked on my Blog Tracker and evidently I’ve been linked to the Tom Yawkey wikipedia page!
Someone, and I swear to the ghost of Josh Gibson it wasn’t me, included the following sentence in the “Charges of Racism” section of the entry.
“Even after integrating, racism was believed to play a role in moves made by the Red Sox, notably the trade of star outfielder Reggie Smith in 1973.”
That sentence is footnoted and linked to the Sully Baseball – Home Grown vs. Acquired Dodgers entry.
I couldn’t be more proud.
Not only will I continue to hate the Yawkey family, but I have become a reference!
Hopefully some kid will be writing a term paper on the Yawkeys and use my site as a source. It would be an honor.
(In my days we couldn’t cut and paste! We had to plagiarize from the World Book!) 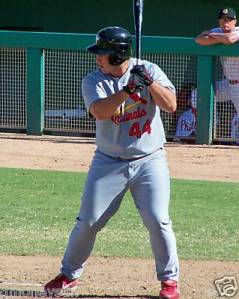 Seriously. I know Brett Wallace is a coveted prospect. And I know that playing in the American League means he can slide into the DH role.
But the guy is 22 years old. He won’t be 23 until August 26th.
Should he REALLY have the ole Steve Balboni build?
It’s one thing when Matt Stairs physique when you are 16 year veteran over 40 years old and hanging on as a left handed pinch hitter.
This guy Wallace is going to be supposedly one of young corner stones of the offense. The scouting report says he may have to move from third base.
Really? How about he has to move from the all you can eat buffet at Sizzler?
Look this can be a good deal for Oakland if he turns into a solid slugger and doesn’t have Albert Pujols blocking his way. And who knows, maybe the other two players (Clayton Mortensen and Shane Peterson) can contribute and this will be a much better haul than letting Holliday skedaddle for the draft picks.
I just think Wallace needs to meet a little fellow named “Dr. Atkins.”