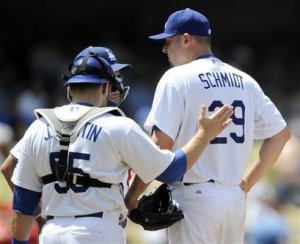 I was living in the Bay Area when Giants ace Jason Schmidt defected to the LA Dodgers before the 2007 season for $47 million over three years.

Oh there were some upset people calling KNBR that day.
Not so much now.
2 1/2 years later the Dodgers have collected 33 2/3 innings from Schmidt.
That’s nearly $1.4 million per inning.
Plus he’s let up 25 earned runs in those innings for a 6.68 ERA and posted a 2-5 record.
You realize that’s not just for this season… that’s over the 3 years combined.
And after yesterday’s 3 inning thrashing by the Marlins he very well might be done in a Dodger uniform.
A cool $23.5 million per win if that happens. Good work for a guy who peaked when he arrived in San Francisco in the early 2000s and declined in the mid 2000s and now is injury prone.

Meanwhile the Giants drafted Tim Alderson and Jackson Williams as compensation for Schmidt.

Williams is a catcher for the Giants AA team in Connecticut. He can’t hit and doesn’t have much power.

Meanwhile Alderson, a starting pitcher, is moving his way up the system after winning 13 games in San Jose last year.

All he needs to do is get to the bigs and win 3 games and he’ll top Jason Schmidt.