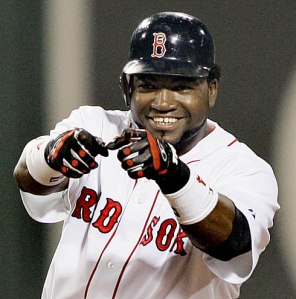 Big Papi’s name has come up in the same list that sunk A-Rod last February.

Papi’s was on the juice.
Is anyone surprised anymore?
Could this possibly be shocking to ANYONE?
Even the biggest homer Red Sox fan (and Red Sox fans don’t get much bigger than yours truly) had to think somewhere in the back of their mind that Papi was a juicer!
I could write a lot about this today, but I’ve already addressed the big issues.
Back in February, I told Red Sox fans to not get too cocky about A-Rod’s name coming out. There were probably some 2004 Red Sox on that list.
Turns out there were.
And when the whole Manny thing hit the fan, I listed a bunch of undeniable facts about David Ortiz.
It’s not pretty folks… and I know the Yankee fans are going to come out swinging that 2004 and 2007 were illegitimate (all the while cheering Andy Pettitte and Alex Rodriguez.)
Is it sad?
I guess so.
Does it make 2004 and 2007 a little less thrilling?
I’m not sure yet.
Does it make me want to see the Red Sox win the 2009 World Series more than ever?
You bet.