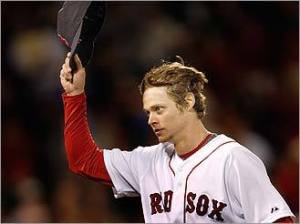 Seriously, how many bases loaded jams could the Sox let Ricky Romero get away with last night?

The Red Sox added some depth and literary value to their bullpen by recalling Marcus McBeth.

I have no clue if he will help or not, but I certainly hope he has a better relationship with his wife than the other guy with that name.
(Yeah I know, it is spelled MacBeth… but how often do the Sox bring up a Shakespearean named player? I don’t think there’s a utility infielder named Falstaff in Pawtucket.)
I bet Jody McDonald will pick up on it.

I know a way to heaven for Barry Zito.

Right now his $126 million contract that he inked before the 2007 season is always brought up as one of the worst in baseball history.
Last year not only did he not pitch like an ace, but as a 17 game loser with an ERA of 5.15, he didn’t pitch like a #5 starter.
I saw him pitch at a game in AT&T Park earlier this year with my mother and two kids. He got clubbed so badly that my mother in law felt bad for him when he got booed.
But there is an easy way to make people forget all of that, even with 4 more years left on the deal:
Pitch like he did tonight and win some more big games.
He’s let up 1 run in his last 20 1/3 innings.
And if Cain can right his ship, suddenly the Giants would have three aces.
Can you imagine the Giants in a short series against Philadelphia with Lincecum throwing 2 games, Cain throwing a game and Zito pitching like this in game 3?
That would make a lot of people forget 2 1/2 unremarkable seasons.
Post season success can be quite a cure all.
If I, Paul Sullivan, the man who did NOT want J. D. Drew in a Red Sox uniform, could become the founder of the J. D. Drew Fan Club based solely on his post season heroics, then Barry Zito can become a fan favorite in San Francisco.