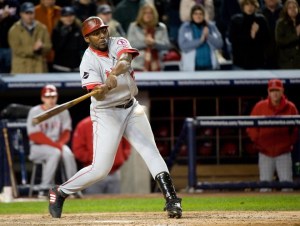 Maicer Izturis is probably going to be the goat for tonight’s game. Throwing an easy ball away and not taking the sure out at first base, costing your team the game will do that to you.

But the staff at Sully Baseball all agree the true goat is Vlad Guerrero.

How is that even possible?

I’ll tell you how it is possible… you keep batting with the bases loaded and swinging at pitches that even Eric Gregg would have called a ball during the Livan Hernandez game.

He had the bases loaded, 2 outs and a tie game at one point… he swung at one pitch that he had to lunge over the plate to foul off and struck out with a ball in the dirt.

Hey Vlady, I know I shouldn’t give advice to you, a former MVP, but here it is anyway.

When you find yourself lunging over the plate for a pitch, you should probably take it.
When you see a ball kicking up dirt faster than a gopher at Bushwood, maybe take it.

And if taking this pitches could mean taking the damn lead in a playoff game, then forget that whole free swinging reputation you have.

(Isn’t it great… against Papelbon he breaks the Red Sox backs, but against the Yankees he’s 1-7 and was approaching double digits in the ole L.O.B. column.) 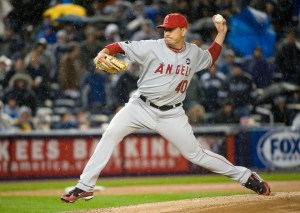 So now Brian Fuentes blew a big game… a game where his team was 3 outs from winning.

And he joins Fernando Rodney, Ryan Franklin, Joe Nathan, Huston Street and Jonathan Papelbon as closers who wet the bed with 3 outs to go this October.

(It is cruel to include Ryan Franklin on this list because, well, he GOT the 3rd out… Matt Holliday couldn’t catch it.)

Also throw in the wonderful team effort melt down by the Phillies yesterday and this October is filled with late inning rallies and dramatics.

And as I wrote before… NONE by Brad Lidge?

What are the odds of that? 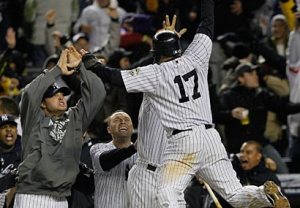 The ALCS is over.

This game, like Saving Private Ryan, was a classic with a crappy ending.

The Angels needed to win that game in order for this series to have any relevance. And they came close.

Kevin Dyson got close to the end zone in that Super Bowl too.

A classic Yankee hater nightmare. Like that Twins extra inning game 2 in the NLDS, the game slipped away as will any chance of the Yankees not winning the pennant.

Get used to it rest of the world. Alex Rodriguez will be playing in his first World Series. There will be chanting for a 27th title and it is now up to the Phillies or the Dodgers to keep that from happening.

These next two games in Anaheim (there won’t be 3 in Anaheim) are merely a formality. A chance to end the series outside of a rainstorm.