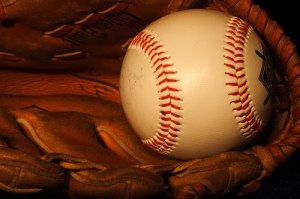 Ever feel left out when your friends start having an in depth baseball discussion?

Ever wish you can participate, but don’t want to spend every spring, summer and fall studying the game to become an expert?

Then follow my guide and learn my 10 simple phrases and you too can talk baseball.

When you feel the conversation beginning to slip into baseball, you can keep up by knowing two words:

Say any mundane baseball fact and have it preceded by “bottom line” and it sounds like you are a baseball lover who wants to get to the heart of the matter.

Most baseball fans are Pavlovian and will mainly be impressed that you are giving the bottom line. 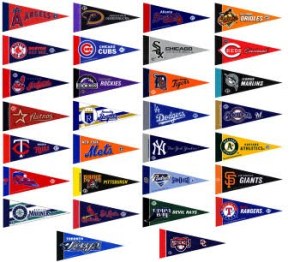 DEALING WITH TEAM BY TEAM ANALYSIS

As the conversation digs deeper into analysis of the teams, an unprepared conversationalist could get lost.

With 30 teams and dozens of players on each team, a baseball fan expects you to know each and every one, when in truth, if pressed I don’t even think the manager of the Washington Nationals can name his own starting outfield.

So once again, 2 sentences can get you out of any analysis.

Shake your head while you say it, and act like you are the first person to make this statement.

It will tell whomever is talking “Look don’t waste my time with analysis, I’ve already figured it out.”

If you are really good, you can throw a “bottom line” at the end. They will be expecting one at the beginning, not at the end. 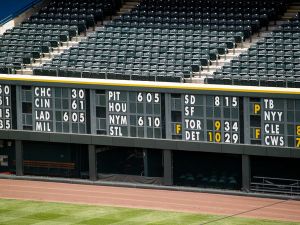 Baseball more than any other sport is bogged down with statistics. Some are so convoluted; impossible to calculate and meaningless that they can actually prove Joe DiMaggio was a bad player.

Some baseball fans cling to the stats like a jock version of John Nash, scribbling batting averages and E.R.A.s on their windows and flinging them back at you with Rain Man accuracy.

When the stats start to pile up, you can reroute the conversation with two words:

Two simple words derail the love of stats and makes you sound like you won’t be swayed by their petty numbers. The truth is you don’t know what they are saying, and chances are they don’t either.

“But he actually did.”

If the discussion sticks to home runs and the steroid scandals, simply say:

“EVERYONE WAS ON THE JUICE.”

This refers to a baseball conspiracy theory that all the players were on steroids and therefore the games were actually fair because it was cheater versus cheater.

Are you following? Don’t worry, they aren’t either.

Often discussions turn to player’s salaries. You are best to avoid any financial discussion, but if you can’t get out of it, one sentence comes to the rescue:

“CAN YOU IMAGINE WHAT BABE RUTH WOULD MAKE TODAY?

This will end any salary conversation because it requires the participants to do math… which baseball fans can only do with statistics, not with money.

So far you are hanging in, but now comes the trickiest and bumpiest stretch on the baseball conversation road: 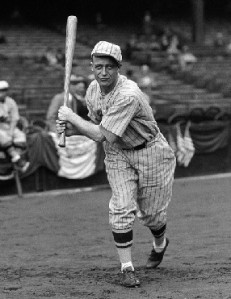 Baseball fans treat their history with almost a scary reverence. The Hall of Fame in Cooperstown treat a uniform worn by Mookie Wilson with the same white glove care as the shroud of Turin.

To tread into baseball nostalgia is an endeavor as chancy as a religious debate.

If you feel brave enough to fake your way through a nostalgic baseball discussion, perhaps it would be best to tread lightly.

“I WISH THEY WOULD GO BACK TO THEIR OLD UNIFORMS.”

This will buy you some nostalgia time and probably make the other participants go on for about 45 minutes while you nod.

The only way this can backfire is if they are talking about the Yankees, who haven’t changed their uniforms since the 1910s. If you make that mistake, just throw in a few “bottom lines” to get yourself out of it.

If debates about the greatest player in history start to heat up, again it is best to nod. If you are asked about your opinion of a certain player, respond:

This of course refers to a phantom team that you would own, and for some reason it is an honor for a player to be included. Be sure not to over do this one, however. You could wind up having 15-20 catchers on your team, which is too many to play.

A more advanced conversation would include the phrase

“HE GETS HIS UNIFORM DIRTY.”

This is either a reference to a hard-nosed style of play or a complete and utter lack of hygiene.

But if pressed to name the greatest player of all time, use the final trick.
Invent any sort of down home sounding colorful nickname and add a common last name to it.
If the other participants say “I never heard of him” simply reply:

“HE PLAYED IN THE NEGRO LEAGUES.”

This could end all discussions because nobody wants to look racist and disrespect the Negro Leagues. And because so few people, even die-hard baseball fans, know anything about the Negro Leagues, they will take on faith that “Wheelbarrow” Jones was the greatest player of all time.

Say it with enough confidence and you will get someone to say “Oh yeah, I’ve heard of him.”

Right about now you sound as knowledgeable as Bob Costas and a force to be reckoned with.

Look how it all flows together.

You see. A complete baseball conversation of which you had no idea what you were saying and your friends don’t know that because they didn’t say anything of value.

And if all else fails, just say 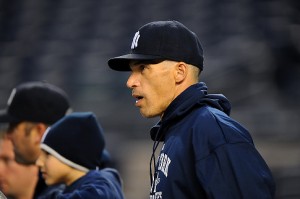 Man I am glad I am not Joe Girardi today.

It looks like we’re going to have thundershowers in New York today and the chances of the game being played are thinner than that airbrushed picture of Filippa Hamilton.

So if the series is to resume on Sunday, what the hell should Girardi do?

Should he go for the jugular and start C. C. Sabathia on 3 days rest?

Should he start Andy Pettitte on his regular rest and have Sabathia ready to go in either Game 7 of the ALCS or Game 1 of the World Series?

Jeez when I write them both out like that, they both make a lot of sense.

The Angels’ confidence is running high right now going into New York. They have a new lease on life… and the two guys who are credited with lightening up the Yankee clubhouse (Nick Swisher and A. J. Burnett) are wearing goat horns.

But the Angels haven’t figured out Sabathia… who is 2-0 with a 1.12 ERA in the ALCS and has an awesome WHIP and strikeout to walk ratio… and is a stud.

It would all but certainly put an end to the series.

It would pull the rug out of any momentum and erase any relevance of the two Angels losses.

OF COURSE YOU DON’T! The Yankees went on to win the World Series those years… and the Angels grittiness would be thrown into the pile of forgotten playoff series.

Sabathia would be the exclamation point. Plus he is capable of throwing 8 or 9 innings, thus making sure the suddenly ineffective Phil Hughes and Joba Chamberlain don’t have to come into a big game.

Wouldn’t that be a desperation move?

The YANKEES are in the lead, not the Angels. The Yankees are throwing Andy Pettitte and save for a Vlad Guerrero homer in Game 3, he pitched well.

And what if… and bear with me on this… the Angels BEAT Sabathia in Game 6? It’s possible. Sabathia lost 8 times this season.

He was dreadful in the post season prior to this year.

There could be a pitchers duel… or a battle of the bullpens.

So let’s say the Angels win a Game 6 started by Sabathia. They would have insane confidence going into Game 7… the Yankees would be pressing and the Game 7 pitching match up of John Lackey vs. Andy Pettitte would favor Los Angeles… or California… or Anaheim… or Los Angeles of Anaheim.

And isn’t this over managing exactly what has Girardi in the crosshairs of the fan base’s ire?

And if Sabathia DOES win Game 6 on Sunday, he would not be ready to throw in the World Series until Game 2… and he’d only have 2 starts. Which means the Yankees would be forced to start either Chad Guadin or the artist formerly known as Joba Chamberlain.

Can you imagine how Girardi would be crucified if Chad Gaudin is forced to pitch a critical Game 4 of the World Series?

Use those pearls of wisdom when you make your decision Joe.