Remember a few weeks ago when the Rockies/Phillies game was snowed out?

OK probably not. Chances are you forgot the Rockies were even IN the playoffs this year. They are stretching the post season out in a ridiculous manner.

It’s one thing to stretch a Series deep into October or even into November when say a huge earthquake hits San Francisco… or it is delayed because of September 11th.

But the World Series shouldn’t end after Halloween because Fox really wants to promote Glee!

Why you say? Well let’s get back to Denver, shall we?

Let’s say the World Series would be in Denver rather than Philadelphia (which would be cold enough!) I’m going to go out on a limb here and say it is a smidge chilly.

Well my friend Veronica lives in Denver. She took this picture from her front door today. 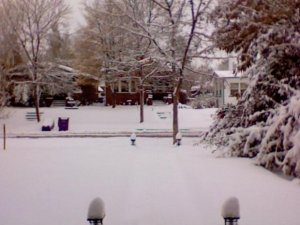 Can you imagine Fox dragging the cast of Glee, Bones and Hell’s Kitchen into a blizzard for a nightgame?

But this is supposed to be the best match up of the baseball year… and with the Twins moving to an outdoor stadium, there is a possibility for a series of November games in Minnesota and Colorado!

How hard could it be to start the season a few weeks earlier?

Play the last two weeks of March in places like Los Angeles, Atlanta, San Diego, Texas, Houston, San Francisco and cities that have a dome like Tampa, Seattle, Arizona, Toronto and Milwaukee.

Or maybe, heaven forbid, play 5 double headers at home and 5 on the road and wrap the season up in mid September.

Anything to avoid having the World Series played on HOTH!!!