12 months ago Brad Lidge was on the bottom of a pile… the perfect year as a closer completed… and clinched a much desired World Series title for Philadelphia.

12 months ago Cole Hamels was the young and handsome ace who won the NLCS and World Series Most Valuable Player.

12 months ago Brad Lidge and Cole Hamels were immortals.

Now Lidge has become a villain again as his 2 out, 2 strike nobody on meltdown cost the Phillies their best chance in sending the series back to the Bronx.

And if there is a bigger villain it is Cole Hamels who has gone from Post Season Ace to bust who pitched timidly to Andy Pettitte and just wants it to end now.

Here’s something to think about…

The Yankees are about the win the World Series.

Everyone knows it, I am not jinxing anything.

Now let’s take a look at two quick things. Who are the other teams that made the post season in 2009? And who are their closers?

The Cardinals won the NL Central. Their closer is Ryan Franklin. He had a blown save this playoff… albeit aided by Matt Holliday’s inability to catch a flyball.

The Rockies won the NL Wild Card. Their closer is Huston Street. He blew a game that had the Rockies won, there would have been a do or die Game 5 against the Phillies.

The Twins won the AL Central. Joe Nathan is their closer. He let up a 9th inning game tying homer to A-Rod in the Division Series.

My Red Sox won the AL Wild Card. The closer is Jonathan Papelbon. And of course he blew a game where the Red Sox were one strike away from extending the series… but the Angels pulled away and won.

Those same Angels won the AL West. Brian Fuentes is their closer. He also let up a game tying homer to A-Rod in Game 2 of the ALCS. Had the Angels won that game, it could have changed the whole tone of the post season.

The Dodgers won the NL West. And Jonathan Broxton is their closer. Broxton was an out away from tying the series at 2 when he let up a back breaking walk off hit to Jimmy Rollins in Game 4 of the NLCS.

The Phillies have Brad Lidge as their closer…. and tonight he didn’t blow a save but he might have done worse. He might have sunk the World Series because he couldn’t get out of an inning where he had 2 outs, nobody on and 2 strikes on the hitter.

Meanwhile, the Yankees have Mariano Rivera.

And he hasn’t blown a save yet this post season.

And the Yankees are on the cusp of winning the World Series in 5 and stampeding through the post season with only 3 losses.

And some people still claim he is overrated.

Some people are stupid.

I am getting tired of praising him!

Seriously… Pedro Feliz was about to put his name permanently in the lore of Philadelphia sports.

2 out, 2 strike home run off of Joba Chamberlain suddenly tied the game.

Suddenly if the Phillies could keep the Yankees off the board and score a run in the 9th… they’d be tied in the series.

Cliff Lee would take the mound with a chance to give the Phillies a 3-2 series lead back to the Bronx!

And yes, we’d have ourselves a great World Series… all swung on the heroics of Pedro Feliz.

It wouldn’t have been a game winning shot, just a series turning shot.

Lidge does a faceplant and now the outcome of this World Series is merely a formality.

And Feliz is reduced to a mere footnote in this series. 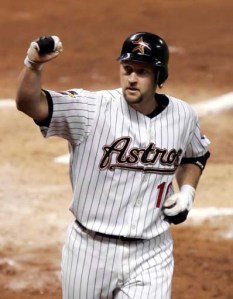 Remember in the 2005 World Series… the White Sox had a 2-0 series lead and were about to go up 3-0 in the Series? Then in the 8th inning of Game 3 with 2 outs, Jason Lane, who had already homered that game, laced a clutch game tying double… giving the Astros life.

OF COURSE YOU DON’T REMEMBER THAT!

I didn’t remember that, and I am a lunatic who remembers EVERYTHING baseball!

Unless you are in the Lane family, his heroics have completely slipped your mind.

Why? Because the White Sox wound up winning that game! How the Astros tied it is irrelevant.