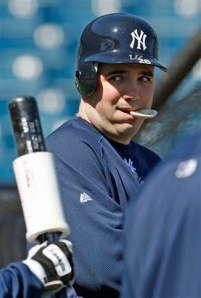 Remember how the Yankees let Matsui and Damon walk mainly because they didn’t want them breaking down on their watch.

Fair enough… but how exactly does chubby and oft injured Nick Johnson fit into the plans?

You know the guy who missed the entire 2007 season and has played more than 131 games in a season exactly once in 8 big league seasons.

The guy who is already hurt…