I am always fascinated when a public figure says something that everyone on the planet Earth knows is Bullsh*t and acts like we’re going to buy it.

Maybe it is the whole Clinton “I did not have sexual relations with that woman” fascination.
Or hearing Pete Rose say he never bet on baseball all of those years.
Or Clemens, Bonds, McGwire and Palmeiro saying they never used ‘roids.
Or hearing how happy James Cameron is for Kathryn Bigelow.

So the latest “Does he really think we are buying it” moment has to come from Frank McCourt. (No not the Angela’s Ashes guy… the other one.)

The other McCourt… the one who owns the Dodgers… claims that his messy War of the Roses like divorce is not affecting the Dodgers.

Of course it isn’t… it certainly did affect how the Dodgers did business this off season. The team, which has fallen 3 games short of the World Series each of the last two seasons, desperately needs an ace pitcher. The Dodgers have lots of young talent with big league experience… and Roy Halladay and John Lackey switched teams as did Cliff Lee twice.

Did the Dodgers ever figure into those moves? Nope.

Oh yeah, Manny Ramirez is clearly in decline and now sulking, and the Dodgers made no attempt to beef up the lineup either.

And did I mention the Los Angeles Dodgers, the marquee team in the second biggest media market in the country, has a lower payroll than the Minnesota Twins?

And this retreat just HAPPENS to be taking place while the owner is in a nasty split that could cost him $1 million a month.

If the Dodgers fall a pitcher or a bat short of the World Series again this year, then you can talk to the McCourts… who will no doubt be lying in their foyer with their chandelier crashed around them.

But I still have a few thoughts about the broadcast that I unabashedly love to watch each year.

Steve Martin and Alec Baldwin did a nice job as hosts…

Steve’s line “This show is so long that Avatar now takes place in the past” was terrific.

But no matter how good they were, I’m still not seeing It’s Complicated. 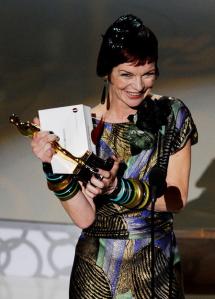 Seriously, there is no excuse for stammering. You have had a month between the nominations announcement and the awards show.

Come up with a 30 second speech.

And don’t give me any crap that “I totally didn’t expect this, so I didn’t prepare anything.” The nanosecond you got nominated, you started holding your toothbrush as if it was an Oscar.

Prepare something and time it for 30 seconds. Costume designer Sandy Powell and composer Michael Giacchino won, said concise heart felt speeches and got off the stage. It’s not that hard. Plus if you can’t think of a speech, go to any coffee shop in Los Angeles and say “Hey! Unemployed writers. Who wants to help me write a clever speech for the Oscars?”

What the hell was up with the Best Documentary Short acceptance speech?

OK, most of you were probably going into the kitchen to get a Mr. Pibb or something during Documentary Short, but those of us who saw this award so a deliciously awkward acceptance speech.

Music by Prudence won the award and producer/director Roger Ross Williams started giving his speech. His fellow producer Elinor Beckett came onto the stage while he was in mid speech and boxed him out a la Kevin McHale in the 1986 Finals. I am not sure what the behind the scenes tension was on this film, but it is clear that nobody puts Elinor in the corner. Needless to say, the music played them off. 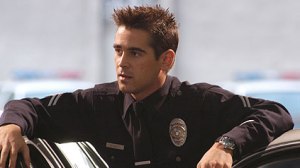 Colin Farrell had a lot of nerve bringing up S.W.A.T. at the Oscars!
When Farrell was giving his tribute to Jeremy Renner during the Best Actor nominations, he brought up their working together on SWAT!

Did you SEE SWAT? I did… it blows. And it is a lousy TV show adaptation of a movie.

Then again, it wasn’t any worse than The Reader. 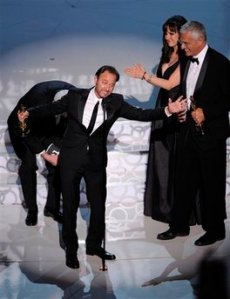 We now live in a world with Academy Award winner Fisher Stevens!

I’m not saying he doesn’t deserve the award… I am just saying that looks odd to see in type. 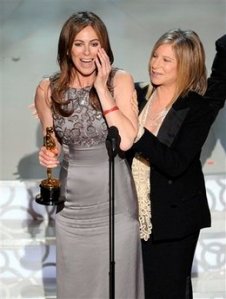 Has Barbra Streisand left the stage yet?

Babs has two Oscars but I got the feeling she wanted to stay on stage with Kathryn Bigelow as long as possible. She knows the caption will read “first ever woman to win the Oscar for Best Director”… and she wanted in on that picture.

A note to Ms. Streisand: The Prince of Tides and Yentl weren’t that good!

He’s the perpetual bachelor Oscar winner and super cool movie star…
and now he is the go to guy to cut to during the Oscar telecast.

Remember how they would always cut to Jack to see if a joke was funny or a tribute was moving?

Now (and for the next few decades) they will cut to George. 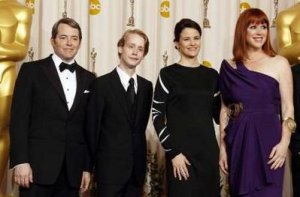 The John Hughes tribute was nice… if not for me

I was 13 when The Breakfast Club came out… and 14 when Pretty in Pink and Ferris Bueller’s Day Off came out. In other words, I am the exact right age to have the movies of John Hughes mean everything to me as an awkward teenager. Here’s the thing: they didn’t.

I never liked The Breakfast Club, thought Ferris Bueller was OK but not earth shattering and I have yet to see Sixteen Candles. I’m not saying they are bad… but I grew up on the Red Sox, Batman comics, Godzilla and movies like Star Wars, Raiders, Ghostbusters, Close Encounters, Wrath of Khan and Back to the Future. When I went to the movies, I didn’t want to see awkward teenagers whining about their life. I saw enough of that in Junior High! I wanted to ESCAPE from that!

I was rooting for Meryl Streep to win, but Sandra Bullock’s speech won me over

I love that Meryl Streep has dropped the super serious “different accent every year” pattern to her career and instead is letting her quirky character actress abilities run rampant. She made fluffy films like Devil Wears Prada and Julie and Julia infectious and her performance as the nun in last year’s Doubt could be her most underrated performance.

But Sandra Bullock was cool, sincere, funny and downright lovable in her acceptance speech… and was cool enough to pick up her Razzie in person. Nothing wrong with that.

He should have won for The Fisher King. Or maybe Fearless. Or maybe Last Picture Show… or The Contender…
Or maybe even Big Lebowski, Tucker or TRON!

All I know it was long overdue.

While we are handing out Oscars to people who should have won one before… how’s about some love for Sigourney Weaver?

It doesn’t seem right does it?

Maybe she should play a down on her luck country singer.

(It worked for Robert DuVall and Jeff Bridges!)

I was stunned The Hurt Locker won

I really thought Avatar was going to win right up until the end. (Hey, wasn’t Tom Hanks supposed to read all the nominees?)

So James Cameron’s hot ex wife upset the King of the World. And now all Cameron has as a consolation prize is a $700 million gross, the two biggest grossing movies of all time and 3 Oscars already on his mantle. How can he sleep at night?

OK, enough… back to baseball.