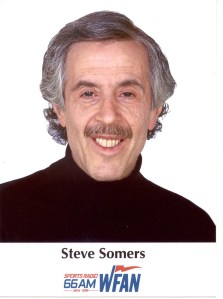 There was a time in my life when I was as big a fan of WFAN as you will ever meet. I listened to Joe Beningo, Mike and the Mad Dog, Suzyn Waldman, Sid Rosenberg, Jody McDonald and even, God help me, Russ Salzberg.

I would call in from time to time and it was a staple on my radio dial and I would for years fall asleep with WFAN playing on the radio.

But nobody was better than the Schmoozer. Steve Somers had the perfect voice, the perfect sarcasm, knew exactly which buttons to press with each caller and could be so condescending in such a friendly way.

Well, when I was looking for a clip to use in my Ryan Howard/Albert Pujols post, I stumbled across this gem.

It was when Somers was in Sacramento (or as he called it later, Sacratomato.) As the sports anchor on KOVR Newwatch 13 in 1982, the future Schmoozer shows the many talents that have made that Bay Area native a mainstay in New York sports talk.

The sarcasm (throwing in a “ho hum” while listing the Cincinnati/Houston score), the admitting he is annoying some of the people listening to him (especially L.A. Dodger fans), the strong opinions (especially regarding Robin Yount’s MVP candidacy) and a flair for the smirking dramatic (the “Fan held hostage” graphic is classic Somers.)

Plus watch the video… besides the amazing late ’70s/early ’80s afro, there are two other awesome elements to this video.

First is how the clips are set up. The score is told first, as opposed to being held to the end. I forgot that is how they did it.

Secondly, look at how cool the Giants looked with the orange top, orange cap bill and cursive writing on the jerseys.

The Schoomzer has always been king… I can say that as Sully here and YOU there!