First of all it makes me sick that I am going to be referring to the movie The Bucket List in this post.

I don’t know anyone who liked that movie, and yet its title has become a pretty efficient short hand of describing an essential to do list while facing a definite deadline.

So damn you Rob Reiner for sneaking that expression into our vocabulary.

But I am going to apply it to Derek Jeter’s career.

Jeter doesn’t have a lot left to accomplish in his career.
He’s a five time World Series Champion.
He’s been a World Series MVP.
He’s had post season heroics.
He has hit 20 post season homers including a walk off shot in Game 4 of the 2001 World Series.
He’s won the Hank Aaron Award twice.
He’s won the Roberto Clemente Award.
He’s a 4 time Silver Slugger Award winner.
He’s a 4 time Gold Glove winner.
He won Sports Illustrated’s Sportsman of the Year.
He has more hits than any Yankee player ever.
He has become the Yankee captain.
He is the biggest New York sports star of his generation.
He has played 14+ seasons in New York without great controversy nor scandal.
He had the last great moment in the old Yankee Stadium with his impromptu thank you to the fans.
He appeared on Seinfeld.
He slept with Mariah Carey (as Chris DeLuca would say, back when that meant something!)

He has a place in Cooperstown secure for him.

AND his #2 is a lock to be retired and he will be mentioned for all time as one of the great champions in the pantheon of heroes in the most glorious franchise in baseball.

(Forgive me as this Red Sox fan just threw up as he wrote that last sentence.)

What else could he POSSIBLY have left on his to do list?

I am NOT going to say “Win the AL MVP.” He has no real control over that and he SHOULD have won it in 2006. No offense Justin Morneau, but you weren’t even the most valuable TWIN that year! (Joe Mauer, Johan Santana and I would argue Joe Nathan were more valuable for their division title that year.)

But there are a few things he can do that will, if you can believe it, make his legacy even greater.

It’s hard to believe with all their legends over the years, the Yankees have yet to have anyone get 3,000 hits in pinstripes.

Heck, nobody has 2,800 hits in pinstripes for that matter.

Jeter is the All Time hits leader for the Yankees, but 2,747 isn’t a round number. Get to 3,000 and reach the gold standard. 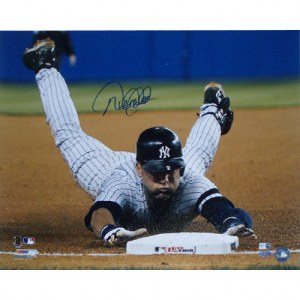 2. STEAL 22 MORE BASES AND BECOME THE YANKEES ALL TIME STOLEN BASE CHAMPION

As of this writing, Rickey Henderson is the Yankees all time stolen base champion. No offense to Rickey, but he was a rented Yankee.

A franchise like the Yankees should have a Yankee under the “All Time” title.

Trust me, it is super rough for me to type that.

And with all the superstars in history, what difference would a 6th ring make for Jeter.

First of all, it will give him the same number of titles as Michael Jordan, the modern gold standard of champions.

Also no player has won as many as 6 World Series rings since Mickey Mantle retired with 7 after the 1968 season.

6 World Series rings would equal the total of Whitey Ford and Lefty Gomez (and a bunch of other role players like Bob Cerv who happened to play for the Yankees at the right time.)

4. MAKE SURE ROBINSON CANO BECOMES THE NEXT GREAT YANKEE

Cano is already an All Star, finished in the top 10 for batting average twice and has a World Series ring.

Most people would be content with a career like that. But he is sharing the middle of the infield with a legend.

And seeing that he is Jeter’s junior by 9 years, it is reasonable to assume Cano will be around after Jeter hangs them up. Cano could become the leader of the team in a similar was that Jeter took over the leadership mantle from the Paul O’Neills and David Cones of the world.

If he hasn’t drilled that into Cano’s head by now, then he should start now! 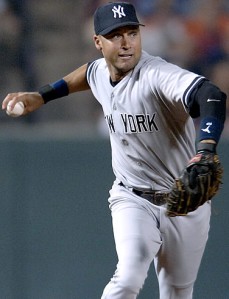 This may make some Yankee fans confused. Some may not believe it.

But there will come a day that Derek Jeter is no longer the shortstop for the New York Yankees.

Somewhere, now, alive on the planet Earth, there is a super talented shortstop who will someday play for the Yankees and have to endure the inevitable comparisons to a Yankee icon.

And the Yankees had better hope that Jeter’s successor will be handled more gracefully than Mariano’s transition to the Joba era.

When the Yankees have a dynamic new shortstop, Jeter needs to take him under his wing and make sure the press is positive.

Meanwhile Jeter will probably move to first base and push Teixeira out of position. (Kind of like how A-Rod had to move to third for Jeter!)

6. GIVE US ONE REALLY FUNNY COMMERCIAL

The Harvey Keitel commercials were OK. I liked the ones with Steinbrenner taking him to task for partying too much.

But unless I am mistaken, he hasn’t hit one out of the ballpark like the Roger Clemens/Debbie Clemens cell phone commercial.

Or even the Joe Torre coming to LA commercial.

So let’s go, Derek. Give us one real solid funny one.

7. RESIGN AND RETIRE WITH THE YANKEES

We can’t have Jeter finish his career as a Padre or a Brewer.

8. HE NEEDS TO GIVE ONE WHOPPER OF A JUICY QUOTE

He has played the New York media better than any sports figure than you will ever see EVER!

And one of his best tricks to say NOTHING interesting when a mike is shoved in his face.

In his last year, I just want him to say ONE explosive thing. Like after a tough loss say “Well, we would have won but there is one player on the team who is always drunk” and have the press try and figure it out.

9. MAKE SURE THE HALL OF FAME SPEECH IS GREAT

Seriously Derek, you are in.

You are in NOW! So let’s say you play for 4 more seasons… that gives you 10 years to make sure the speech is terrific.

I say he should hire a solid writer to create a witty, charming and memorable speech.

Why not Woody Allen? He’s already been a front! 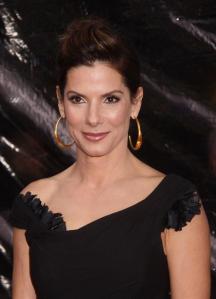 Come on Derek!
You’ve never been married and let’s face it, Sandra has had some bad luck.

You have no kids. Sandra has adopted Jesse James’ kid but I am sure would love to have her own biological child.

How awesome would the off spring of Derek Jeter and Sandra Bullock be?

Now of course Derek’s reputation doesn’t NEED all of this… but it would mean there would be no stone left unturned.

Now I must end this post.
I started off with references to the Bucket List and it turned into a Derek Jeter love letter.

I may have to listen to some Dropkick Murphy’s just to cleanse the pallet.

I still can’t name a single player on the Kansas State Wildcats basketball team… yet I am still rooting for them.

And after their double overtime win against Xavier last night a wonderful thing happened for K-State fans:

They are now favorites to go to the Final Four.

With Butler’s win over top ranked Syracuse (two other teams that I don’t know the starting 5 for), Kansas State is now the top ranked school in the West Region.

Now I am sure Syracuse thought they were going to beat Butler, so K-State can’t take them lightly… but if a #2 seed can beat a #5 seed then my Schadenfreude fueled scenario would come true.

Kansas State would be a Final Four Team while Kansas, the #1 team in the country, couldn’t even make the Sweet Sixteen.

And if they make the Final Four, they wouldn’t have to face a #1 seed from the Midwest as Kansas has been knocked off… so it isn’t outlandish to see Kansas State in the Championship game…

And if they can beat Kentucky or Duke…

OK, I am getting ahead of myself. BUT for all of you Kansas State fans out there, savor this. This could be YOUR 2004… that year where your team was better than the big bad “always better than you and you are sick of hearing of it” powerhouse.

Unleash the prick within!