I think the Red Sox hit into a triple play and Beltre was called safe.
He looked out with the naked eye and I couldn’t tell either way…

You wouldn’t know it flipping around on TV in the Bay Area, but the A’s are in first place.
They just beat the Rangers 4-1 and are going into May on a high note.

And they did it in front of friends and family.

The fans who were at the game are the first on the A’s bandwagon. 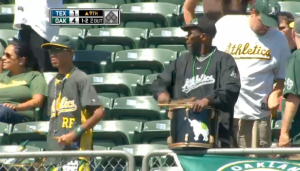 The Oakland A’s are playing a day game this afternoon…

If they win the game against the Texas Rangers they will move into first place all by themselves.

I know it is early in the season, but who knows? This could be one of the highlights of the 2010 Oakland A’s season… and there is reason to have some hope.

So OF COURSE it isn’t on TV in the Bay Area!

I am sure it is a cool special, but it was taped a year ago. 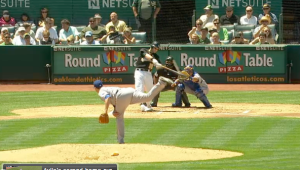 Meanwhile the Texas broadcast is showing the game… and the A’s have taken an early 2-0 lead.

The A’s could be on TVs in restaurants or at home where some kids are playing hooky.

But nope. A beautiful spring day game can only be seen in Texas.

Actually take a look at this screen grab from MLB.com.

The controller lists 4 radio broadcasts (English and Spanish for both Texas and Oakland) but only the Texas TV broadcast.

The game is probably blacked out in the Bay Area… which means literally the ONLY place on the planet Earth where you can’t watch the game even on the computer is in the Oakland area.

Hmm… why can’t the team build a fan base?

I wrote about this before, but this is pure insanity.
Everyone has a few hundred channels on their cable system. Showing the local team on one of them live isn’t too much to ask for.