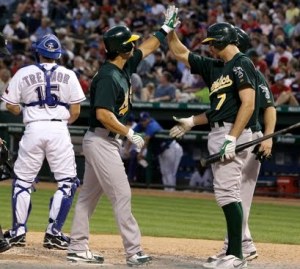 Tonight I made dinner for my kids, took them to the local ice cream store and had them run around outside.

Later my wife and I watched American Idol and I saw the highlights of the Celtics game.

And after everyone went to bed, I checked the other scores, including the Oakland/Texas showdown.

I mean WOW. I mean I can’t wait to see the highlights on MLB.com.
There’s no way the A’s could have a win that tops Dallas Braden’s perfect game… or could they?

Eric Patterson hit a triple to give the A’s the lead in the 7th.

Josh Hamilton hit a 2 run homer to give the Rangers the lead in the 8th.

The top of the 9th had an error, a runner thrown out on the base paths and the A’s somehow pulling ahead 5-4.

In the bottom of the 9th one out from losing the game, Elvis Andrus singled home the tying run.

Daric Barton homered in the 11th to give the A’s the lead.

One out from losing again, the Rangers tie the game in the bottom of the 11th on a Julio Borbon single.

In the bottom of the 12th, a relay by Oakland to the plate gunned down the potential winning run.

And in the 13th, it was Barton again this time with an RBI single with 2 outs and 2 strikes that went under the glove of Ian Kinsler.

Once again the Rangers were an out away from losing but had the winning run at the plate in the form of Julio Borbon. But Tyson Ross in his third inning of work got him to pop out to end the game.

The A’s won and are now tied for first place with the Rangers.

I am guessing the crowd wasn’t that big tonight.
I am betting the TV viewing audience wasn’t that great.

Hell, I didn’t even watch it… but it read like a classic.

I hate to say it as a Sox fan, but if that were Red Sox/Yankees, there would be documentaries and books made about the game.

Instead it will probably be buried on SportsCenter.

But I doubt there will be another back and forth game with a share of first place on the line like this one!