I still think Ned Yost’s firing with 12 games to go and his team in position for a playoff spot is one of the craziest managerial moves I have ever seen.

I said so then and I still think so now.

Well now he takes over the car wreck that is the Royals. Look, I don’t know Trey Hillman and if you heard the post game interview with Royals GM Dayton Moore, you would have thought he was firing Mahatma Gandhi.

I think firing a manager who has a team in line for a playoff spot with 12 games to go is nuts.

But I don’t think firing a manager more than 2 years into his run is so nuts.

The Royals sucked before Trey Hillman arrived and they suck now… maybe Ned Yost can turn things around.

Remember how the Brewers stunk every since year since 1992? They were the AL answer to the Pirates, except the Pirates actually made the playoffs in 1992!

Since 1992, the Brewers have had 2 winning seasons and 1 .500 season, all under Yost’s management. So naturally the Brewers front office axed him when he was going to bring them October baseball for the first time since Harvey’s Wallbangers.

So who knows what he will get out of Kansas City. Yeah he doesn’t have a lot of great players… but he also has so called future stars like Alex Gordon and Luke Hochevar who have both been busts so far. Maybe they’ll turn it around.

Watch him bring the Royals to the division title and he gets fired the day before the playoffs.

The Orioles have stunk for a while, and yet they have a solid all around All Star second baseman in the form of Brian Roberts. He was in trade rumors almost every day since he made the All Star team in 2005.

And the Orioles played footsie with lots of teams, including the Cubs whom he was rumored to be dealt to on an hourly basis.

Were they trying to keep him around and give Baltimore fans another “Oriole for life” in the infield a la Robinson or Ripken?

Were they trying to milk the other teams for as many prospects as possible?
Supposedly the White Sox were offering Gavin Floyd straight up for him but Baltimore wanted more.

Either way, Roberts is having back and abdominal issues and is on the 60 Day DL. You know what that means? It means his season is probably shot.

And the Orioles have an injured second baseman with a steroid history in his mid 30s making $10 million for the next three seasons.

A team that seems destined to hit 90 losses for their 5th straight season (and for the 8th time in the past 10 seasons) will have an albatross on their payroll.

What does this have to do with the Astros? 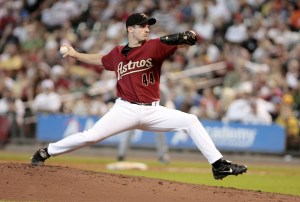 Well, I’ve been borderline begging them to deal Roy Oswalt before it is too late.
They have one of the best trade chips in all of baseball… a top starting pitcher who can be a legit #1 starter (or at least a fantastic #2 or #3 starter for a contender.)

A team in need of a jolt in fan interest, attendance and October revenue could make a big deal for Roy Oswalt and give the Astros and their depleted farm system a much needed replenishing.

Maybe it wouldn’t be the haul that the Blue Jays got for Roy Halladay or the Indians got for Cliff Lee… but they could get a few ready for the show pieces.

But don’t hold on to him too long!
If he gets hurt or too many teams fall out of it, they could be in the same position that the Orioles are in now…

Paying a lot of money for a guy who can’t contribute and can’t get any trade value in return.

Seriously… shop him around NOW!

The Yankees signed Tim Redding today and are bringing him back for his second go round with the club.

This picture is from his first stint with the Yankees in 2005. In fact I can’t believe I could find it on the internet…

It’s from the only game he ever pitched in a Yankees uniform.

The first time around he was gone before he could even be fitted for pinstipes. The Yankees pitching staff in 2005 was a mess and only their bats and Mariano Rivera’s dominance kept them in contention.

So on July 15th, the Yankees brought in Tim Redding from San Diego to start a game in Fenway Park.

It didn’t go well. Both Trot Nixon and Jason Varitek hit RBI doubles in the first to make it 3-0.
In the second he walked Mark Bellhorn and Johnny Damon and allowed a single to Edgar Renteria. (Man, what a time capsule that game was… Idiots like Millar, Mueller, Manny and Mirabelli all played in that game. As did the late Geremi Gonzalez.)

Torre lifted him and all of the runners would come around to score.
The Red Sox won 17-1 that day.
Redding’s line was 1 inning pitched, 4 hits, 6 runs (all earned) 4 walks, 2 strikeouts.

The other pitchers Darrell May, Jason Anderson and Buddy Groom fared poorly as well… and like Redding were all long gone by the time the playoffs got started.

The Yankees wound up winning the east thanks to unlikely contributions from Shawn Chacon, Chein Ming Wang and Aaron Small… all of whom made up for the failures of Jaret Wright, Carl Pavano, Kevin Brown, Sean Henn and of course Tim Reding.

With 2004 flop Vazquez coming back and yesterday not withstanding being a disaster it seems like they are trying to have a reunion of those mid 2000s pitching flops.

Of course Vazquez and Redding weren’t teammates in 2005… you had to be quick to have called him a teammate that year. You only had 24 hours.