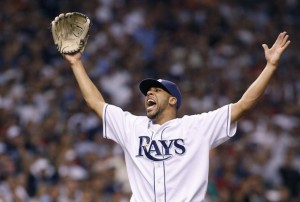 David Price had another terrific outing today, this time throwing 6 innings and no earned runs and as of this writing, the Rays are cruising to a victory against Cleveland.

Price is quickly becoming an All Star caliber starter. If the score holds up he’ll be 6-1 with a 1.81 ERA.

So I guess Price coming out of the bullpen with only 14 innings of big league experience and ending the Red Sox World Series defense in Game 7 of the 2008 ALCS with a 4 out save including a bases loaded strikeout of J. D. Drew isn’t so bad in retrospect.

He was a stud they had barely seen… oh but still I WANTED that game. It would have made the comeback from the 7-0 Game 5 even sweeter… a chance to go back to back.

I remember talking to someone about my shaky Patriot fandom. I told him “I would trade all three Patriots Super Bowl Titles in exchange for a double by J. D. Drew off of David Price.”