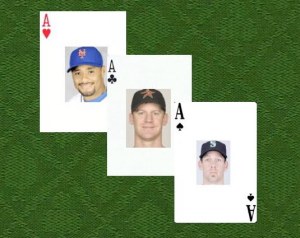 You just have to look at the Indians trading away their two Cy Young winners, Sabathia and Lee, to see how October can be affected by dealing an ace.

And for teams falling out of contention, trading away an ace could bring about much needed building blocks for the future.

Joe Carter, John Smoltz, Brady Anderson, Randy Johnson and Carlos Guillen, among others, were picked up by teams in mid season trades for pitching.

This year there are three legit aces… three difference making pitchers who are pitching for teams that are going nowhere.

One SHOULD be traded. One is ASKING to be traded. And one will INEVITABLY.

Let’s look at the one who SHOULD be traded first:

Santana was supposed to be for the Mets what Curt Schilling was to the Red Sox in 2004. With the Mets falling a Carlos Beltran called third strike short of the World Series in 2006 and the epic collapse of 2007… Omar Minaya needed to make a bold move.

And he did so bringing in the American League’s best pitcher to Queens. And you can’t blame Santana for the collapse of 2008! He won his last 7 decisions in ’08 including a complete game shutout on the second to last game of the season to keep hope alive in Flushing.

But the Mets aren’t an ace away from winning anymore. Their nice April not withstanding, they are a sinking team. Don’t believe me? On April 30th, the Mets were in first place, 5 games over .500. They are 6-14 since and their pitching staff and lineup are wearing down… and their farm system is notoriously bare.

Sure, Santana gives them a great arm every 5 days, but this team needs a shot in the arm and Santana’s trade value may never be this high. A little honesty in the Mets front office would have them admit they are not catching the Phillies (they are already a full week behind Philadelphia) and don’t have the horses to compete.

The team trading for Santana would have him for three more seasons… so the Mets could get as many as three pieces to a long term puzzle. Will they do it? Probably not. It’s the smart thing to do, which isn’t the Mets way of doing things.

Now for the one who is ASKING to be traded.

I’ve been screaming for the Astros to trade Oswalt since the beginning of 2009. And with today’s news that Oswalt is waiving his no trade clause, it looks like it is going to happen.

This is his 10th season for the Astros and he was the MVP of the 2005 NLCS, the Astros lone trip to the World Series, so no doubt he has a lot of affection for Houston and the team.

But this team sucks. He knows it. We all know it. And while he is in the top 10 in the NL for ERA and WHIP, he is also second in the league in losses!

He has a 2-6 record. Only Charlie Morton (he with the 9.68 ERA) has more losses. Oswalt has pitched 6 innings in all 9 of his starts this year and has given the Astros 7 innings 6 times. He’s averaged 7 innings and about 2 1/2 runs a start for his last 5 starts… and has an 0-4 record to show for it.

Like the Mets, the Astros cupboard is bare on the farm and Oswalt should fetch at least 2 players ready to insert on the big league team.

Now the ace who will be INEVITABLY traded.

Have the Mariners woken up (along with Ken Griffey Jr) from their first quarter nap?

10 days ago I said I wasn’t sure what the Mariners should do with their season. Cliff Lee won that day… then the Mariners lost 7 of their last 8 before winning 2 in a row.

They have Lee and Hernandez back, Griffey has some clutch hits and Milton Bradley is back from therapy… and they are still the third worst team in the American League.

There is a better chance that the Cubs will call to reacquire Bradley than Cliff Lee being a Mariner in 2011… and short of a massive winning streak, this Mariner team isn’t contending.

They dealt away some good prospects to Philadelphia, Toronto, Oakland and I think Manchester United by the time the deal was done. It was a nice idea… but they need to think about 2011 now.

So think about the landscape of contenders now. You know two of these pitchers will be wearing new uniforms by the time October rolls around and possibly all three. And whatever contender picks them up will suddenly have a new potent weapon. A playoff contender could get over the hump, like the Brewers a few years ago when they picked up Sabathia.

A pennant contender could overcome their weaknesses with a new ace, like the Phillies last year with Cliff Lee.

Contenders like the Rangers, the Rays, the Cardinals, the Twins and the Tigers could use an arm to put them over the top.

Heavy weights like the Yankees, Angels, Red Sox and Dodgers (divorce not withstanding) all have pitching issues. Acquiring an ace would give the team a nice jolt of adrenaline.

It will change the entire complexion of the pennant race if and when these deals are made… and make me feel not as bad for making lousy predictions in April! 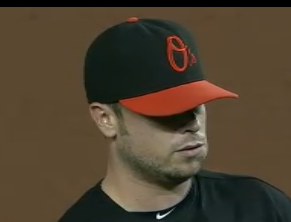 The rivalry between the Orioles and the Nationals could be pretty cool in a few years if all of their prospects work out… and let’s hope by the time both of these teams are good, they’ve worked out their uniform issues!

What’s with the O’s hats? Granted, these hats aren’t as bad as the ornithology correct bird hats… but it’s still kind of lame. 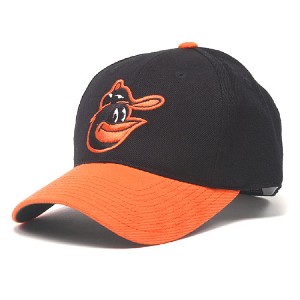 Besides, the Orioles HAD one of the coolest hat logos in all of baseball.

I’ve been BEGGING the Orioles to bring back the smiling bird hat. If they don’t want to have the white front to the cap, then fine. Have it all black with the smiling bird. But neither the boring sideways bird nor the O’s say to me Baltimore Orioles. 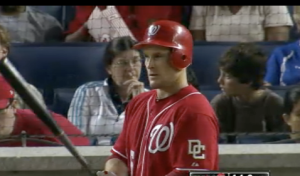 As for the Nationals… what are these red tops?

You know when you go into clubhouse store for your favorite team and they have toddler uniforms or onesies that aren’t exactly the team uniforms? That’s what these red tops look like.

That’s right… I am saying the Nationals look like toddlers.

I told them to get rid of the cursive W and I already praised their regular home uniforms… so don’t mess around making them look like babies.

By the time those babies can walk, with Strasburg on the hill, this could be an awesome clash of talent.

The Red Sox can’t just lose 5-1 in an uninspired way. They HAVE to put together a 9th inning rally… bring Big Papi up to the plate with the bases loaded as the tying run…

And he HAS to hit it to the warning track!

I can’t tell you how this season is going to end… but I CAN tell you this season will give me an ulcer before the All Star Break.

Lackey isn’t looking good… Dice-K and Wakes coming up next. This could get ugly.