Yeah, Gary Coleman’s life had become a train wreck over the last few years… but he made all of us laugh in the 1980s, and that should merit a nice salute.

I always remembered him as Jackie Robinson Cooper in the made for TV movie The Kid from Left Field, which to date is the only time the Padres have ever been seen winning the World Series.

In the movie, Coleman manages the Padres with the help of his dad, a former big leaguer played by the always great Robert Guillaume. If I remember correctly, he beat the Cubs in the NLCS (the film came out in 1979, 5 years before the Padres did that for real in 1984!)

And they beat the White Sox in the World Series on a walk off pinch hit homer by Gary Collins.

I also remember Ed McMahon played the owner of the Padres… and had the strange line that he wanted to win the team’s first World Series since his father owned them. Well at the time the Padres were only 10 years old… so I guess it was an alternate baseball universe.

Either way, it was a baseball movie I dug as a kid and that’s all that matters.

Hats off to you Gary Coleman. You looked good in those Taco Bell Padres unis.

One game Daisuke Matsusaka is coughing up 5 runs in the first to the Yankees… next thing you know he’s throwing a no hitter into the 8th inning in Philadelphia… next start he can’t get out of the 5th against the Royals.

That was Derek Lowe to a T!

Remember how he blossomed and became a great reliever for one season in 2000? We all thought “Holy Cats! We’ve got a classic shut them down closer!”

Then the next year he was so bad he nearly torpedoed the season all by himself.

Then the next year, 2002, he threw a no hitter in April, became a 20 game winner and nearly won the Cy Young Award.

Then his ERA jumped nearly 2 runs the next year. Man you can’t rely on him in the big game.

But he came out of the bullpen and shut down the A’s in that amazing Division Series. He’s back!

Then he lost 2 starts against the Yankees in the ALCS. He’s done.

Then 2004 he was so awful that his ERA was over 5 and he wasn’t even in the post season rotation. He sucks. He’s a mop up man.

Then he won all three clinching games in the 2004 playoffs, including 6 innings of 1 hit ball in the Bronx to win the pennant and 7 shutout innings in St. Louis to win the World Series.

He left perfectly. He left with everyone remembering him as a playoff hero. He got the wild standing ovation during the ring ceremony in 2005 even though he had split for the Dodgers.

It’s like people remembering the Belushi/Chevy years of SNL. They only remember the good parts… not the many unwatchable episodes.

And so it is with Dice-K.

We’ve got the next great pitcher in baseball!

Oh my God! He clinched the pennant! And he got 2 RBI in the World Series and won his game!

Holy Cow he’s an 18 game winner and nearly threw a no hitter in the ALCS against the Rays!

Oh man, he blew his arm out pitching in that stupid World Baseball Classic.

He stinks, he let up 5 runs in the first.

He’s walking the Royals with the bases loaded… why did we sign this guy? 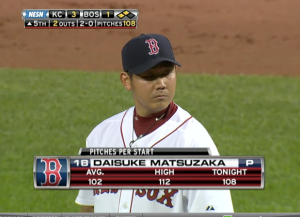 Going up and down that fast will usually give a guy the bends!

Rooting for these guys was kind of like yelling “No Whammys!” while playing Press Your Luck. There’s no rhyme nor reason and you are either going to be thrilled or incensed.

Let’s hope Dice-K has another string of post season luck in him.
There’s only 14 more years left on his contract.

I know the Mets are only 2 back and look like world beaters right now. I beg of you, Met fans… don’t get too excited.

And in fact I think the two nice runs the Mets went on this year will in the end hurt the team… because they NEED to make a big move like dealing Santana when his value is at its best, and they won’t do that when they think they are a contender!!

There was one factor in today’s game the team should take into account. 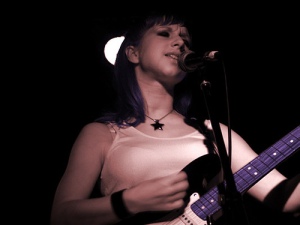 Once again my rocker friend Jaime Fallon was in attendance… and as I wrote before, when she shows up, the Mets win.

It hasn’t failed yet.

The Mets should just give her a season pass, and then get ready for October ball.

(Seriously, Jaime’s attendance is the only reason I can think of for the Mets good fortue.)