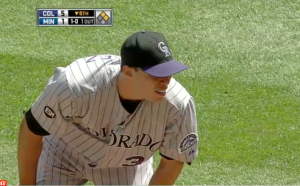 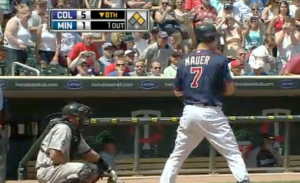 JUST as I finished typing my last entry about Jimenez pitching against the Twins, Joe Mauer came up to the plate.

The front runner of the 2010 National League Cy Young Award faced off against the defending American League MVP. 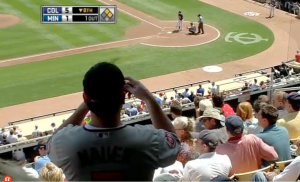 The crowd loved it… taking pictures of the match up.

It is PRECISELY the unorthodox head to head match ups that Interleague Play has in mind.

Mauer lined out in a bang bang play where the runner at first was doubled up.

Jimenez goes 8 strong with 1 run… ups his record to 13-1 and has a 1.15 ERA now. And Twin fans got to see on a beautiful June day a match up they wouldn’t normally see.

Ohhhh. So bad for baseball! 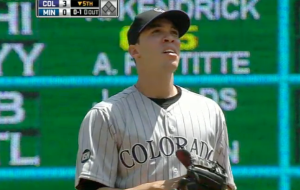 It’s a beautiful day game in Minnesota. A decent crowd is on hand and they are getting a real treat. Ubaldo Jimenez is on the mound for the Colorado Rockies.

He’s having a Cy Young caliber season and his ERA ROSE to 1.16 in his last win in Denver. He’s having a remarkable season, looking to be the first starting pitcher since Roger Clemens in 2005 to finish the season with a sub 2.00 ERA and enough innings pitched for the ERA title.

And remember he’s doing that pitching half of his games in DENVER!

So Twins fans will get a chance to see Jimenez pitch against Morneau (sadly Mauer isn’t playing) in the beautiful new park. And they are seeing him at his peak… and they probably wouldn’t see him again for a few years as the Interleague Matchups rotate.

It’s a good fun and unusual day for baseball… and again it shows the opponents of Interleague Play have got NOTHING.

If this were a game in Houston, or Pittsburgh or Arizona there would be nothing unique about it. The Rockies come through a few times a year anyhow.

But here Twins fans have a chance to see their team face someone having a possibly historic season.

Keep games like this in mind the next time you hear some of the same sorry bogus complaints about Interleague Play!

Going into the season who thought a Rockies/Twins game was going to be interesting?
Probably as many people who circled a Nationals/Indians game on their schedule.

It’s good for baseball… especially in mid June when the excitement of the season starting has worn off but it is still too early to feel like a pennant race.

Deal with it folks. Interleague Play works and it is cool.
Sorry things that work and are cool upset you.

(By the way, he threw shutout ball into the 8th. The Twins are now rallying. The crowd is into it. Better not have THAT happen on a June day!) 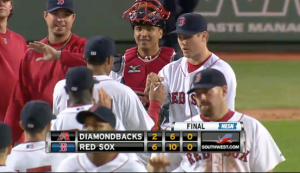 I know technically this was a save for Papelbon… but not for one nanosecond did I think the Red Sox were going to lose this game or even was in danger.

It was a nice no doubt about it win for my boys. It was a solid win for Lester and the Red Sox picked up a game on both the Yankees and the Rays.

When you consider Beckett, Ellsbury and Dice-K are on the DL, Ortiz got off to the horrible start and the offense has been up and down and the Rays and Yankees are the two best teams in baseball… the fact that the Sox are only 3 games out and 4 back in the loss column in mid June isn’t so bad.

Now if you will excuse me, I need to drive 20 miles back home from work