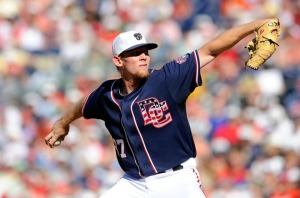 Stephen Strasburg is not on the All Star roster.
Of course he isn’t.
Why would he be? It would just make the All Star Game more electric, more fascinating and exciting.

Why would baseball want to do something like that?

Why would you want to have a phenom who has faced virtually NOBODY on the A.L. All Star team and have some fascinating head to head match ups?

Why would you want to have a moment where the player that is filling up stands in places like Cleveland and Washington play on the grandest stage while the interest of him is at a peak?

Why would you do something like that? Why would baseball want TO DO SOMETHING SMART?

And spare me talking about his win loss record. The Nationals have scored a grand total of 3 runs for him in his last 4 starts COMBINED!

And I don’t want to hear about how the All Star Game roster spot needs to be for a truly accomplished player. The fans voted in Kosuke Fukudome one year.

Jose Offerman is a 2 time All Star. Tyler Green made an All Star team.

Were fans glued to the TV thinking “Oh boy, I hope Jose Rosado gets into this game.”

And also spare me the whole “He’ll make the All Star Game later” nonsense.
He will NEVER have this sense of mystery and freshness. It’s a once in a lifetime opportunity to have Strasburg face the A.L. All Stars for the first time… and they blew it to give Matt Capps a spot on the team.

Strasburg versus Jeter, Guerrero and Mauer
Capps versus Ty Wigginton?

You blew it baseball.
Swing and a miss.

Earlier in the morning I carefully crafted an All Star Roster for the American League. I weighted pros and cons and put together reserves and a pitching staff that represented each team, had depth and a chance to win.

This NL Roster?
I am slapping together at the last minute.

It’s my algebra days all over again! I’m doing my homework on the bus, sneaking it in under the wire.

I want to get this one written before we have a big Sullivan family barbecue.

If a player was voted in by a fan, I will make a note… if not it was chosen by the staff at Sully Baseball.

(Keep in mind Chase Utley and Jason Heyward will be voted in by the fans but injured come game time… so we picked their replacements.)

So here we go!

So there you go… that’s my NL Team.

I am sure I left someone obvious off the team, but I slapped this together.

And yeah, I put R. A. Dickey on the staff. I know you could probably throw another name at me… but Dickey has had a terrific year and I want to see a knuckleball pitcher throwing the AL Line Up… so sue me!

Have a great 4th of July!

The All Star rosters are going to be announced today and inevitably there will be a lot of people ticked off at the results.

And there will be people angry at the popularity contest that is the fan votes.

And also people will hate that every team needs to be represented.

All predictable reactions…
But I am not going to bitch and moan. Or at least not yet. I am going to assemble my All Star Roster for the American League and post it before the real one is announced.

And I will use the current All Star rules.
In other words the starting line up will be as voted by the fans and each team will indeed have a representative.

I’ll pick 24 reserves and pitchers for the AL.

And seeing that homefield advantage in the World Series is on the line, I am putting together a teamwith a shot to win.

PITCHERS and RESERVES
(As selected by the Staff of Sully Baseball)

There you have it.
Each team is represented and each position has an able back up. The rotation and bullpen are deep and there is a pair of reserve catchers.

You might be asking, “Now dear Sully, why are you only doing the American League?”

Because I am tired and I want to go to bed.