Last night Omar Vizquel drove in the go ahead run in a game where the White Sox would ultimately lose in extra innings to the Mariners.

I was watching the game and the graphic above caught my eye.

Omar Vizquel is tied for 50th on the all time hit list.

I had to rub my eyes for a second to make sure I didn’t see that incorrectly.

There have only been 49 people with more hits than Omar Vizquel in the history of the major leagues.

Only 2 players in the history of baseball who are eligible for the Hall of Fame have that many hits and are not in Cooperstown.

Vada Pinson and Harold Baines, who was Vizquel’s teammate in Cleveland and now is one of his coaches for the White Sox.

Now earlier I wrote about how if Harold Baines got 7 more hits in each of his seasons, he would have had over 3,000 hits and be in the Hall of Fame.

But Baines was a pure hitter. He was a DH for almost his entire career and even as a hitter, he very rarely was considered to be one of the elites.

Vizquel has been one of the elite shortstops for a generation.
He has the 11 Gold Gloves to prove it. When I wrote about who should be in the Hall of Fame in 2007 and 2009, I put Omar Vizquel on the edges saying in 2007:
“His Offensive numbers haven’t even come close, but has there been someone who has been such an overwhelming DEFENSIVE prescence as Vizquel for the past 17 seasons? That should count for something!”

And in 2009:
“His defense was so good he might make it in. It would be nice if he was more of a threat with the bat.”

Well if he can be listed among Hall of Fame names in the hit column with pure hitters, then maybe he belongs in!

And Luis Aparcio and Ozzie Smith and Bill Mazeroski are all in the Hall mainly for their gloves… and Vizquel has surpassed them in the hit column.

This is his 22nd season and his 4th decade in the bigs and can still pick the ball. And while his .276 average isn’t making Josh Hamilton nervous yet, it does show that he probably has a few more years left.

Either way, consider myself sold.

Omar Vizquel belongs in the Hall of Fame.

I say it and I stand by it. 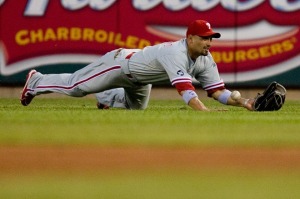 Somewhere the REAL Philadelphia Phillies are bound and gagged in a basement.

The team that was a consensus LOCK to win its 4th straight NL East title and the odds on favorite to win their third straight National League pennant and shoot to the top of the “All Time Greatest Philadelphia Team” list has been replaced.

I think it is an Invasion of the Body Snatchers situation.

A Phillies team devoid of emotion (and talent) has been hatched from pods and placed in the city of Brotherly Love and we have a team stumbling into the last stretch of July looking like an also ran.

Seriously, this was the team that people thought was built like an American League team, signed up Ryan Howard long term and brought Doc Halladay to Philly.

And now they sit a mere 2 games over .500, 7 games behind the Braves in the NL East and in 6th place in the Wild Card chase.

Is it ALL the injury to Chase Utley?
They are 8-12 since losing him to injury, but even on his last day, the Phillies were 3 1/2 out of first.

On May 17th, the Phillies were in first place with a 5 game lead, looking like they were about to pull away and make a mockery of the NL East race.

Since then, they are 24-32. Only the Diamondbacks, Nationals and Pirates have been worse since then.

And if they lose tomorrow afternoon to the Cardinals and the next day to Colorado (neither an outrageous possibility) then the Phillies will be at even .500 a week before the trade deadline.

If the two teams are tied, does that mean the Phillies should be trading veteran players? Should they be sellers?

It’s tough to say. I still think the Phillies still have a good run in them. I still think that people like Jimmy Rollins (who has been grotesque this year) and Raul Ibanez and Cole Hamels have a hot streak in them.

And my friend Michael Ferraro and I think that Jayson Werth could be dealt to a team that needs a bat (San Francisco anyone) and maybe flip the young player acquired for Werth in exchange for a reliever… and start minor league phenom Domonic Brown.

Otherwise… find the pods. YOU’RE NEXT! 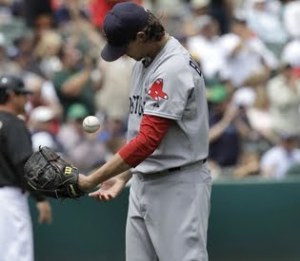 It is late July… and the Boston Red Sox are 7 games out of first place.

They are one week of games behind the Yankees. And with the way the Yankees are playing, like today, where Javy Vasquez stunk and Joba Chamberlain again showed why he should be traded away, and they STILL win… it is clear that injuries to Pettitte and Burnett be damned… shaky bullpen or not… they are playing in October.

And the Sox are 4 1/2 games behind the Rays… not Everest but still quite a hill to climb when you consider the Sox just can’t seem to be getting a winning streak against AMERICAN LEAGUE opponents.

And the return of Clay Buchholz wasn’t a magic bullet, nor a dodged one for that matter.

I know they could go on an amazing August and the Yankees and Rays could stub their toes. But unless they are going to start up Interleague Play again, I don’t see this Sox team going on a prolonged winning streak.

It may be soon that I stop doing the tally… it is getting almost irrelevant.

DODGED A BULLET GAMES – 28
April 4 – 9-7 win against Yankees (On Opening Night, the Red Sox overcome a 5-1 Yankee lead with a game tying HR by Pedroia and a go ahead passed ball.)
April 10 – 8-3 win against Kansas City (Beckett out pitches Zack Greinke and nearly gets decapitated by a line drive.)
April 14 – 6-3 win in Minnesota. (Okajima gets Morneau to pop up with the bases loaded in the 7th and Papelbon wiggled out of a 9th inning jam.)
April 20 – 7-6 win against Texas. (Darnell McDonald introduces himself to Boston with an 8th inning game tying homer and a walk off hit in the 9th.)
April 21 – 8-7 win against Texas. (The Red Sox were down 4-0 early only to win it on Youk’s 2 out 11th inning double.)
April 23 – 4-3 win against Baltimore. (The Sox blow a 3-0 lead but win it on Adrian Beltre’s bases loaded walk.)
April 24 – 7-6 win against Baltimore. (The Red Sox score 6 in the 7th and hold off a late Baltimore comeback attempt.)
April 26 – 13-12 win at Toronto. (The Sox blow an early 5-0 lead but hang on for dear life in a slugfest.)
April 27 – 2-1 win at Toronto. (Buchholz holds the Jays down for 8 but it takes a bases loaded walk in the 8th to go ahead.)
April 28 – 2-0 win at Toronto. (Daniel Bard wiggles out of trouble in the 8th to help Lester shut down the Blue Jays and finish the sweep.)
May 4 – 5-1 win against the Angels. (Juan Rivera misplays Jeremy Hermedia’s 2 out flyball into a 3 run game winning double)
May 5 – 3-1 win against the Angels. (Papi and Beltre homer and the Sox hang on despite squandering many potential rallies.)
May 6 – 11-6 win against the Angels. (Dice-K puts the Red Sox in a 4-0 hole before they even bat. The Sox bats respond.)
May 10 – 7-6 win against the Blue Jays. (Sox blow an early 2-0 lead, take advantage of some errors and hang on.)
May 18 – 7-5 win in New York. (Sox climb back from a 5-1 hole. A day after hitting a walk off homer, Marcus Thames drops a fly ball to start the winning rally for the Sox.)
May 25 – 2-0 win in Tampa. (Big Papi supplies all the offense as Papelbon wiggles out of a 9th inning jam.)
May 29 – 1-0 win against Kansas City. (Zack Greinke holds the Sox to one run, but they make it stick)
June 1 – 9-4 win against Oakland. (Lackey puts the Sox in a 4-0 hole but Victor Martinez goes 5-5 and the Sox score 9 runs late.)
June 2 – 6-4 win against Oakland. (Dice-K puts the Sox in a 3-0 hole before they come to bat, but come back thanks to Papi’s homer.)
June 8 – 3-2 win at Cleveland. (With Papelbon unavailable, Okajima, Ramirez and Bard hang on to make a winner out of Wakefield.)
June 19 – 5-4 win against the Dodgers. (Sox make 4 errors, blow a late lead and let Manny homer, but they win it in the bottom of the 9th on a Pedroia single.)
June 20 – 2-0 win against the Dodgers. (Dodgers blow an early bases loaded scoring opportunity and allow Buchholz to settle down for the win.)
June 24 – 13-11 win in Colorado. (The bullpen lets up 9 runs in 5 innings, but Pedroia homers 3 times including with 2 outs in the 10th to win a wild and stupid game.)
June 26 – 4-2 win in San Francisco. (An injury running the bases takes Buchholz out in the second, but the bullpen and Mike Cameron’s bat and glove win the game.)
July 2 – 3-2 win against the Orioles. (Wakefield gets the win and J.D. Drew homers twice, but it is Nava’s 2 out 8th inning bloop that landed between three fielders that breaks the tie.)
July 11 – 3-2 win in Toronto. (Jesse Litch took a no hitter into the 6th but back to back homers by McDonald and Big Papi win the game.)
July 17 – 3-2 win against Texas. (Youk ties the game in the 9th off of Cliff Lee and wins it in the 11th with a sacrifuce fly)
July 19 – 2-1 win at Oakland. (Beltre homers and Dice-K holds on to the win.)
TEETH GRINDER GAMES – 29

How appropriate… I am losing hope as they have sunk into the NEGATIVE in my tally.

It’s not getting any prettier