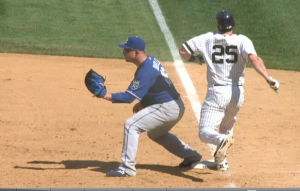 The Royals beat the Yankees today and frankly, with KC on pace to lose 92 games, they need all the help they can get.

But when Mark Teixeira hit a difficult grounder with 2 outs and 2 on and the Yankees down by three, he beat out the throw to first base.

I thought it was the case with my naked eyes and less than one minute later no fewer than two replays showed he was clearly safe.

He was called out.

The Yankees would have had the bases loaded, 2 outs, Yankees down by 3 and A-Rod up, knowing an out would win the game for the Royals but a grand slam would win it for the Yankees.

But alas we can’t have it because we can’t waste that minute.

Ahhh the insanity of no instant replay.

About a month ago, I wrote that I wasn’t buying the Rangers as a legit division contender until they had a lead at Labor Day.

I stand by that.
I still believe that historically the Rangers wilt in the August heat. However they are doing something significant in late July:

They are padding the lead significantly. They have are up 7 games on the Angels… and can make it 8 with a win on Saturday.

I still think the Rangers will slump in the heat and some of their pitching will be shaky in the kiln like conditions of Arlington.

But with the Angels and A’s inconsistencies and the Mariners giving up… maybe the Rangers can withstand a lousy August.

I don’t think the Angels can make up a week of games in a month.

The Rangers have my attention, but I stand by my “wake me when it is Labor Day” stance.

And I still think their uniforms suck.

Seeing Josh Beckett on the mound again was a welcoming sight… and having him pitch better than the Josh Beckett of early 2010 was even MORE welcoming.

When I saw the Mariners scored a first inning run off of him, I thought “uh oh.”
But who would have guessed he had a decent game in him. Granted, not a near no hitter like John Lackey… but a nice addition to the team.

And oh yeah, a Bill Hall homer that was barely fair wins the damn thing.

4 back in the loss column for a playoff spot… should I have hope?

Talk to me when it is 1 back in the loss column.
Until then, let’s update the tally.

DODGED A BULLET GAMES – 30
April 4 – 9-7 win against Yankees (On Opening Night, the Red Sox overcome a 5-1 Yankee lead with a game tying HR by Pedroia and a go ahead passed ball.)
April 10 – 8-3 win against Kansas City (Beckett out pitches Zack Greinke and nearly gets decapitated by a line drive.)
April 14 – 6-3 win in Minnesota. (Okajima gets Morneau to pop up with the bases loaded in the 7th and Papelbon wiggled out of a 9th inning jam.)
April 20 – 7-6 win against Texas. (Darnell McDonald introduces himself to Boston with an 8th inning game tying homer and a walk off hit in the 9th.)
April 21 – 8-7 win against Texas. (The Red Sox were down 4-0 early only to win it on Youk’s 2 out 11th inning double.)
April 23 – 4-3 win against Baltimore. (The Sox blow a 3-0 lead but win it on Adrian Beltre’s bases loaded walk.)
April 24 – 7-6 win against Baltimore. (The Red Sox score 6 in the 7th and hold off a late Baltimore comeback attempt.)
April 26 – 13-12 win at Toronto. (The Sox blow an early 5-0 lead but hang on for dear life in a slugfest.)
April 27 – 2-1 win at Toronto. (Buchholz holds the Jays down for 8 but it takes a bases loaded walk in the 8th to go ahead.)
April 28 – 2-0 win at Toronto. (Daniel Bard wiggles out of trouble in the 8th to help Lester shut down the Blue Jays and finish the sweep.)
May 4 – 5-1 win against the Angels. (Juan Rivera misplays Jeremy Hermedia’s 2 out flyball into a 3 run game winning double)
May 5 – 3-1 win against the Angels. (Papi and Beltre homer and the Sox hang on despite squandering many potential rallies.)
May 6 – 11-6 win against the Angels. (Dice-K puts the Red Sox in a 4-0 hole before they even bat. The Sox bats respond.)
May 10 – 7-6 win against the Blue Jays. (Sox blow an early 2-0 lead, take advantage of some errors and hang on.)
May 18 – 7-5 win in New York. (Sox climb back from a 5-1 hole. A day after hitting a walk off homer, Marcus Thames drops a fly ball to start the winning rally for the Sox.)
May 25 – 2-0 win in Tampa. (Big Papi supplies all the offense as Papelbon wiggles out of a 9th inning jam.)
May 29 – 1-0 win against Kansas City. (Zack Greinke holds the Sox to one run, but they make it stick)
June 1 – 9-4 win against Oakland. (Lackey puts the Sox in a 4-0 hole but Victor Martinez goes 5-5 and the Sox score 9 runs late.)
June 2 – 6-4 win against Oakland. (Dice-K puts the Sox in a 3-0 hole before they come to bat, but come back thanks to Papi’s homer.)
June 8 – 3-2 win at Cleveland. (With Papelbon unavailable, Okajima, Ramirez and Bard hang on to make a winner out of Wakefield.)
June 19 – 5-4 win against the Dodgers. (Sox make 4 errors, blow a late lead and let Manny homer, but they win it in the bottom of the 9th on a Pedroia single.)
June 20 – 2-0 win against the Dodgers. (Dodgers blow an early bases loaded scoring opportunity and allow Buchholz to settle down for the win.)
June 24 – 13-11 win in Colorado. (The bullpen lets up 9 runs in 5 innings, but Pedroia homers 3 times including with 2 outs in the 10th to win a wild and stupid game.)
June 26 – 4-2 win in San Francisco. (An injury running the bases takes Buchholz out in the second, but the bullpen and Mike Cameron’s bat and glove win the game.)
July 2 – 3-2 win against the Orioles. (Wakefield gets the win and J.D. Drew homers twice, but it is Nava’s 2 out 8th inning bloop that landed between three fielders that breaks the tie.)
July 11 – 3-2 win in Toronto. (Jesse Litch took a no hitter into the 6th but back to back homers by McDonald and Big Papi win the game.)
July 17 – 3-2 win against Texas. (Youk ties the game in the 9th off of Cliff Lee and wins it in the 11th with a sacrifuce fly)
July 19 – 2-1 win at Oakland. (Beltre homers and Dice-K holds on to the win.)
July 22 – 8-6 win at Seattle. (Lackey lost a no hit bid in the 8th and the Mariners scored 5 in the 9th to tie before the Sox won in 13)
July 23 – 2-1 win at Seattle. (Bill Hall’s barely fair homer gives the Sox the win on Beckett’s return.)
TEETH GRINDER GAMES – 29


Up to +1.
Lester on the mound… maybe if Martinez, Pedroia, Ellsbury, Lowell and Varitek come back soon that Wild Card lead can be trimmed.

Either way, go for the series win tomorrow.