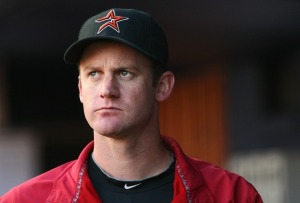 Seriously Roy… after today, you may not want to be playing double hard ball.

As for the Astros, what did I write last Monday?

I said the Astros may have blown their chance to deal Roy Oswalt and get a few darn good pieces to a rebuilding process on the squad.

I’ve been hounding them to deal Oswalt since before the 2009 season… and all THIS year too.

Then on Monday he leaves a game when a line drive went off his ankle. I said they blew it.
And I got private e mails from Astros fans saying “It’s not going to affect his next start.”

He looked lights out today… as in the lights are out on a big trade.
6 runs and 9 hits over 5 innings today?

He’s combined for 9 innings over his last 2 starts and a not so pretty 7 runs over those 9.

Yeah, he’s had a good year this year, but if you were going to mortgage your future AND commit for 2 expensive seasons, would you do it when the prize pitcher was in a slump?