I wonder how many fans cheering for A-Rod as he entered the 600 home run club were booing Barry Bonds and saying how awful his chase of Hank Aaron was for baseball.

I wonder how many of them thought Mark McGwire and Jose Canseco is a bum.

I am guessing there is some overlap.

And basically it goes to show what I’ve always felt… when it comes to steroids and PEDs we only care when ANOTHER player is doing it.

I wrote the other year how the “Mannywood” section in Dodger Stadium used to be filled with people taunting Barry Bonds’ interesting bulkiness.

Sosa is personal non grata in Wrigley, but that’s because he quit on the team.

Soak it up A-Rod. You’ve joined the 600 homer club. Oh there will be hand wringing when it comes to your Hall of Fame vote (it will be interesting to see how Sammy Sosa does with the voters) but he happy you did it at home.

The fans love a winner… no questions asked.

Buck Showalter has his own Mission Impossible and he chose to accept it.

He’s taken on a few doozy assignments over the years:

Rebuild the Yankees of the early 1990s.

Build a team in Arizona.

Put a winning product on the field in Arlington.

He did all three… and Joe Torre and Bob Brenly reaped the rewards of Buck’s hard work with a few World Series titles. (I wonder what Buck felt like seeing the Yankee team he helped put together being beaten by the Diamondback team he managed just a year before in the 2001 World Series.)

Well now he needs to take what used to be one of the great baseball cities ever and make them care about the birds again, something they haven’t done since Ripken was in uniform.

Step one: Make sure the Orioles don’t have one of the worst records in the history of baseball.

So far so good. 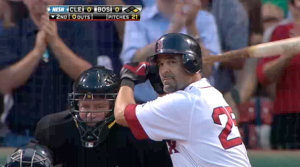 Well wasn’t THAT a fine “Nice to have you back!”
Seriously, Youk gets hurt, Lowell comes back and BAM! Sox take the lead, Lowell makes a nice play in the field, Beckett looks dominating and the Red Sox beat Cleveland.
It’s 2007 all over again!
OK, probably not. We’ll probably have a MUCH different result. Yeah I know Lowell and Hall are essentially replacing Youk and Pedroia right now and they both homered last night. But the Sox are still a little too far back to realistically make a run at this.
But as long as they keep winning and the Yankees keep dropping games to Toronto… who knows?
Let’s update the tally.
DODGED A BULLET GAMES – 35
April 4 – 9-7 win against Yankees (On Opening Night, the Red Sox overcome a 5-1 Yankee lead with a game tying HR by Pedroia and a go ahead passed ball.)
April 10 – 8-3 win against Kansas City (Beckett out pitches Zack Greinke and nearly gets decapitated by a line drive.)
April 14 – 6-3 win in Minnesota. (Okajima gets Morneau to pop up with the bases loaded in the 7th and Papelbon wiggled out of a 9th inning jam.)
April 20 – 7-6 win against Texas. (Darnell McDonald introduces himself to Boston with an 8th inning game tying homer and a walk off hit in the 9th.)
April 21 – 8-7 win against Texas. (The Red Sox were down 4-0 early only to win it on Youk’s 2 out 11th inning double.)
April 23 – 4-3 win against Baltimore. (The Sox blow a 3-0 lead but win it on Adrian Beltre’s bases loaded walk.)
April 24 – 7-6 win against Baltimore. (The Red Sox score 6 in the 7th and hold off a late Baltimore comeback attempt.)
April 26 – 13-12 win at Toronto. (The Sox blow an early 5-0 lead but hang on for dear life in a slugfest.)
April 27 – 2-1 win at Toronto. (Buchholz holds the Jays down for 8 but it takes a bases loaded walk in the 8th to go ahead.)
April 28 – 2-0 win at Toronto. (Daniel Bard wiggles out of trouble in the 8th to help Lester shut down the Blue Jays and finish the sweep.)
May 4 – 5-1 win against the Angels. (Juan Rivera misplays Jeremy Hermedia’s 2 out flyball into a 3 run game winning double)
May 5 – 3-1 win against the Angels. (Papi and Beltre homer and the Sox hang on despite squandering many potential rallies.)
May 6 – 11-6 win against the Angels. (Dice-K puts the Red Sox in a 4-0 hole before they even bat. The Sox bats respond.)
May 10 – 7-6 win against the Blue Jays. (Sox blow an early 2-0 lead, take advantage of some errors and hang on.)
May 18 – 7-5 win in New York. (Sox climb back from a 5-1 hole. A day after hitting a walk off homer, Marcus Thames drops a fly ball to start the winning rally for the Sox.)
May 25 – 2-0 win in Tampa. (Big Papi supplies all the offense as Papelbon wiggles out of a 9th inning jam.)
May 29 – 1-0 win against Kansas City. (Zack Greinke holds the Sox to one run, but they make it stick)
June 1 – 9-4 win against Oakland. (Lackey puts the Sox in a 4-0 hole but Victor Martinez goes 5-5 and the Sox score 9 runs late.)
June 2 – 6-4 win against Oakland. (Dice-K puts the Sox in a 3-0 hole before they come to bat, but come back thanks to Papi’s homer.)
June 8 – 3-2 win at Cleveland. (With Papelbon unavailable, Okajima, Ramirez and Bard hang on to make a winner out of Wakefield.)
June 19 – 5-4 win against the Dodgers. (Sox make 4 errors, blow a late lead and let Manny homer, but they win it in the bottom of the 9th on a Pedroia single.)
June 20 – 2-0 win against the Dodgers. (Dodgers blow an early bases loaded scoring opportunity and allow Buchholz to settle down for the win.)
June 24 – 13-11 win in Colorado. (The bullpen lets up 9 runs in 5 innings, but Pedroia homers 3 times including with 2 outs in the 10th to win a wild and stupid game.)
June 26 – 4-2 win in San Francisco. (An injury running the bases takes Buchholz out in the second, but the bullpen and Mike Cameron’s bat and glove win the game.)
July 2 – 3-2 win against the Orioles. (Wakefield gets the win and J.D. Drew homers twice, but it is Nava’s 2 out 8th inning bloop that landed between three fielders that breaks the tie.)
July 11 – 3-2 win in Toronto. (Jesse Litch took a no hitter into the 6th but back to back homers by McDonald and Big Papi win the game.)
July 17 – 3-2 win against Texas. (Youk ties the game in the 9th off of Cliff Lee and wins it in the 11th with a sacrifuce fly)
July 19 – 2-1 win at Oakland. (Beltre homers and Dice-K holds on to the win.)
July 22 – 8-6 win at Seattle. (Lackey lost a no hit bid in the 8th and the Mariners scored 5 in the 9th to tie before the Sox won in 13)
July 23 – 2-1 win at Seattle. (Bill Hall’s barely fair homer gives the Sox the win on Beckett’s return.)
July 26 – 6-3 win in Anaheim. (Papi homers twice and Buccholz and Papelbon each wiggle out of jams to get the win.)
July 27 – 4-2 win in Anaheim. (Jed Lowrie’s 2 run 7th inning double gives the Sox the lead and makes a winner out of John Lackey. )
July 28 – 7-3 win in Anaheim. (Youk ties the game in the 7th with a homer and Scutaro wins it with an 8th inning grand slam to sweep the Angels.)
July 31 – 5-4 win against Detrout. (Big Papi hits a 3 run walk off double to crush the Tigers in the 9th.)
August 1 – 4-3 win against Detroit. (Sox blow a 3 run 9th inning lead but the Tigers throw away a 9th inning sacrifice bunt to give the Sox the win.
August 3 – 3-1 win against Cleveland. (Lowell homers on his first pitch back and plays sparkling defense to preserve the win.)
TEETH GRINDER GAMES – 33

Lester tomorrow… hey he won the clinching game of the 2007 World Series. Maybe the 2007 feel good party can continue!