118 games into the season and the first and 21st biggest payrolls have reached a standstill.

The Yankees and Rays are dead even… and chances are both teams are making the post season. (It will take an effort worthy of the 2007 Rockies for the Red Sox to be a factor again.)

And while any suspense to whether or not they will be playing in October, there is concern this year to actually WIN the Division.

Unlike say 2003* and 2004 or 2008 when the ALCS was a match up of AL East teams that steamrolled through the competition, there is a truly formidable obstacle in the way of the ALCS:

The Texas Rangers and Cliff Lee on the road in Arlington for Games 1 and 5.

You want to face him? Granted, both the Yankees and Rays won games recently started by Lee… but how many times do you think you can pull THAT off?

So the two teams are going to play 44 and whomever has the best record will face the White Sox at home. No push over team, to be sure… but homefield advantage and avoiding Cliff Lee is the key.

They play 7 more times against each other.

The Rays have an edge in pitching edge. While they have experienced injuries, they have been able to stick in minor league stud Jeremy Hellickson into their rotation and Soriano has made the bullpen solid.

The Yankees have Sabathia, but Burnett is inconsistent, Vazquez is mediocre, Hughes is up and down and Pettitte is hurt. And oh yeah, no reliever not named Rivera can be trusted.

And schedule wise, Tampa finishes the season against Seattle, Kansas City and Baltimore while the Yankees finish against Toronto and Red Sox teams who would LOVE to knock the Yankees out of the Division Lead.

I wish it were a 3 team race, but 6 games back in the loss column with 7 weeks to play is a bit much to ask for.

Another day for Joba Chamberlain, another bomb let up.
Remember how he could have fetched the Yankees an ace? Now he is the biggest reason for why the Yankees might not repeat as World Champs.
Their two biggest weaknesses now? Lack of rotation depth and the unstable bridge to Rivera. (Don’t believe the weak lineup now. When the leaves will turn brown, so will the shorts of opposing pitchers.)
Joba was supposed to fill one of those roles. Instead his ERA is now at 5.02 and he turned a 2 run game into the 9th into a 3 run game into the 9th. Just what you want from your middle relievers. 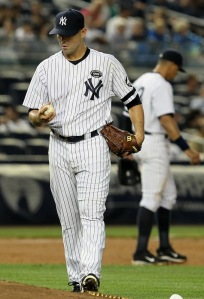 Of course Javy Vazquez didn’t make the night much better.

This coupled with Pettitte’s slow recovery makes for a very interesting last few months of the season as the Rays and Yankees jockey for position.

I wonder if he has a choice.

The Rangers are playing the Rays at the Trop and game one of the series was a Cy Young match up of David Price versus Cliff Lee. The game itself was a thriller with the Rays coming back from behind and recapturing a portion of the AL East lead (and be tied for the best record in baseball.)

Both teams are filled with young exciting All Stars playing a brand of baseball that should be emulated across the land. And both are winning big despite financial constraints (the Rays and their microscopic payroll and the Rangers with bankruptcy and changing ownership.)

It could be a playoff preview, especially if the Rays capture the AL East crown, and a best of seven series between these teams (each in search of their first ever World Series title) would be filled with tension.

And it would the match up of TBS’ nightmares.

Baseball has a hard enough time getting a national audience… with this series they will stuggle to get a LOCAL audience. The Dallas/Arlington/Fort Worth area would probably be wondering why the coverage of Cowboys practice has been preempted and 13 years and a pennant later, people in Tampa Bay still seem unaware that there is a baseball team in St. Pete.

If baseball had any promotions savvy they would be able to make these teams seem exciting and the antidote to big market teams bullying smaller markets.

Then again, people CLAIM they don’t want to see the Yankees play a big market team in the World Series… then the Yankees vs the Phillies gets higher ratings than when smaller budget teams like the White Sox, Astros, Tigers, Cardinals or Rays are in the series.

Baseball will never be football in popularity, but why can’t they at least make their product SEEN more? Football can turn a Super Bowl between New Orleans and Indianapolis into a national event.

Maybe when Bud Selig steps down, someone who can MARKET a sport can take over.

(That’s right, I had to find a way to blame Selig.)