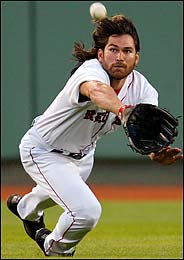 According to ESPN Boston, the Red Sox have claimed Johnny Damon off waivers from Detroit. Now that DOESN’T mean he is automatically going to Boston. That just means in the post Waiver Wire deadline, the Tigers can only make a deal with the Sawx.

Well why not?
Are people still bitter about how he left the Red Sox for the Yankees?
GET OVER IT! That was 5 years ago and the Red Sox have won a World Series since then.

We need to be less petty about things. And wouldn’t it be nice to have a GOOD conclusion with a former Red Sox star?

Why does everyone have to be on the Ungraceful Exit Red Sox Team?

We’ve been starting Bill Hall in left field too often for my taste. Maybe a little bit of Damon’s ability and willingness to crash into the wall can rub off on Ryan Kalish.

Who knows? Maybe Johnny can spark a big comeback for the Red Sox.

Either way, I like amicable good byes and if there is tension between me and someone else, I like to resolve it.

Maybe Dice-K can let him wear #18 for the last few months.

I say WELCOME BACK

On March 8, I wrote about how I missed the Houston Astros. The team that CALLS themselves the Astros no longer has the identity of the funky team of the future.

Instead it is a team of phony nostalgia, forced quirkiness and generic uniforms. In other words, a big pile of blah.

Well if the Astros were smart, they would look at Jeff Bahry’s work.

On the amazing site Uni Watch, they are having a Design an MLB uniform exhibition. Fans get to create prototype uniforms. Some are cool. Some are traditional. Some are a little crazy. (The Washington monument on this Nationals uniform looks a little phallic. Then again, so does the Washington Monument.)

But the coolest design was by Bahry. He, like me, pines for the days when the Astros were orange, wacky and proud of it. 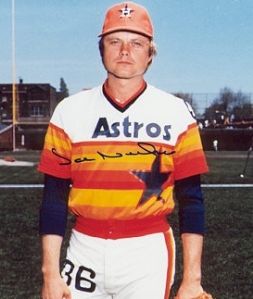 He wrote “Growing up in Houston, I was never a big fan of the Astros’ “tequila sunrise” uniforms. My “faux-back” jersey includes design elements that I admired from earlier looks. It includes the traditional color palette, original “shooting star” & “orbiting baseballs” logos and futuristic lettering & numbers.”

So let’s take a look at his design…

I’ll say it… it is perfect.

You bring back the orange color scheme and the funky futuristic motif. (And the star with the H on it for the hat.)

Also the whole “shooting star” from the Jimmy Wynn/Joe Morgan years is back.

But if the tequilla sunrise uniforms were too much to bear, he just went with the block orange top. No longer the red tops that make them no different from St. Louis or Cincinnati.

Now it is a bit odd the logo still includes the Astrodome… but hey! At least we see the team of the future again instead of a team pining for a past that they never had.

If Astros management is read this blog (and I know they do) hire Jeff Bahry right now.

He’ll restore your identity before you can say Cesar Cedeno!

Roger Clemens is facing perjury charges and not only is his reputation in shambles but he might soon be sent to prison.

I am not sure what his legal counsel told him to do, but I have a feeling they DIDN’T say “Get into pissing contests with people on Twitter.”

I could write more but the great Lisa Swan of The Faster Times covered it beautifully.