With the Phillies win and the Giants loss last night, San Francisco fell BEHIND the Phils for the Wild Card hunt.

The Giants need to bear down and get into a winning streak, and I think it might be time to do something that would have been unimaginable just a few months ago:

I think the Giants should skip Tim Lincecum’s next start.

Yup… it’s come to this.
Yes yes I know he only let up one run after the three run first inning bomb to Adam LaRoche… but he’s down to 11-9 and frankly is pitching like a SUB .500 pitcher.

Last week my dad said to me they should skip Lincecum’s start and I thought he was doing a knee jerk reaction to a loss to St. Louis.

I’m not talking about someone like Cole Hamels having a massive run of bad luck.

I say skip a start… something is messed up in his head and he needs to get his thinking straight.

It’s tough to do when you can’t shake a losing streak.

Maybe he should call Bengie Molina.

I’ve seen many blown saves in my day.
And many of them have been by Brad Lidge… but tonight’s was a doozy, even by his breath taking standards.

The Phillies can beat the Padres and gain a game on the Giants and pick up a game on Atlanta. Oswalt was on fire… so naturally the ball was handed to Lidge.

And the inning went as expected… lead off single, runners moved up…

Then came the back to back whammies.
With 2 outs and a 1 run lead in the bottom of the 9th and an 0-2 count he HIT Ryan Ludwick to load the bases.

That’s awful. But I saw Calvin Schraldi hit Brian Downing with an 0-2 pitch with the bases loaded and a 1 run lead in the bottom of the 9th to tie a PLAYOFF game in 1986.

So Brad Lidge would have to raise his game to impress me with a blown save tonight.

Ohh he was up to the task.
With the bases loaded, a 1 run lead, 2 outs in the bottom of the 9th and an 0-2 count to Chase Headley… HE BALKS IN THE TYING RUN!

I’ve never seen that in a game between two playoff contenders.

So with a day game after a night game, the Phillies have to go deep into their pen in an extra innings game and the wonderful pitching duel between Roy Oswalt and Mat Latos is in the garbage.

All because Brad Lidge BALKED in the tying run.

Oh man… Brad Lidge’s deal with Satan is getting worse and worse. 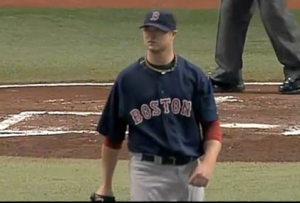 It was a matchup of two Cy Young contenders… and the Red Sox desperate to climb back into the land of relevance.

And as I wrote before, tonight was a must win for the Red Sox… and they did.

They won with power, Lester shutting them down and Papelbon striking out the side. (Don’t tell me you didn’t have images of Dan Johnson’s 2008 homer off of Papelbon dancing in your head when he came up.)

And Lester out duels Price.

Suddenly the Sox aren’t dead.
I’m not saying they are in striking distance yet… but it is suddenly getting interesting.

And Buchholz up tomorrow.
We need to win this series to keep hope alive.

Win tomorrow and we’ll have dreams of a sweep.

One game at a time.