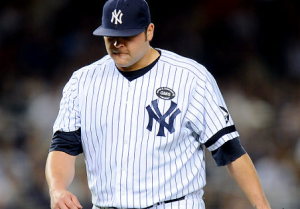 I know Joba and Javy have been pinatas for me all year… but let’s face it, they’ve earned every single whack the way they’ve pitched.

Don’t believe me? Just look at last night… a game where their supposed 8th inning stud and supposed new rotation workhorse were used in their playoff roles: Mop up men.

Actually Joba was given the role to get out of a 6th inning bases loaded jam and keep the game close at 4-3.

How did he do? Well not only did he let all three inherited runners to score but let up another run charged to himself. A close playoff feel game turned into a blow out where by the end I think Joe Girardi was asking Guiliani’s son if he wanted an at bat.

But the actuality of Joba’s futility could only be overshadowed by the disrespect the umpires gave to Javier Vazquez.

Keep in mind the scenario… the Yankees and Rays are neck and neck… they might meet up in the post season with the AL Pennant on the line… this is their LAST regular season meeting… the games, save for last night, were rife with emotion and posturing…

And with the Rays blowing the Yankees out of their own building and former supposed Cy Young candidate turned “use only in blow outs” mop up man Javier Vazquez hit Desmond Jennings.

Then he hit Willy Aybar… no warning issued.

Even the umpires knew “He’s not trying to hit them… it’s Javy Vazquez. He sucks.”

I like to think Javy WAS trying to hit them, just to show his teammates his toughness and to show them how much a team guy he really is.

And the ump saying “Sorry Javy… I’m not buying that you are doing that intentionally!”

For those of you who think I am too tough on Javy Vazquez, take it up with home plate umpire Andy Fletcher.

He agrees with me.

It’s to the point where the Yankees almost have to say “We can NOT put either Joba nor Javy on the post season roster.”