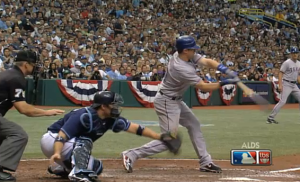 Yup…
He struck out.

The video showed it.

Instead they had to strike him out AGAIN and he hit a three run homer to break a playoff game wide open and possibly sink the Rays.

Now were the Rays winning this game if Young struck out?
We don’t know.

But we DO know is they unraveled after they were denied the strike out they earned.

Remind me why Qualls needed to get FOUR strikes again?

(We are setting up for a disastrous Denkinger-esque call this post season… some critical game will be turned on a bad call… if only we had the technology to FIX that.) 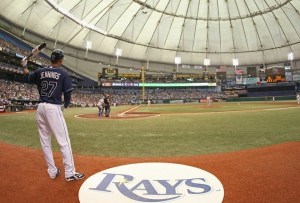 All year long, the Rays played great baseball but the fans didn’t show up.

Today, fans packed the Trop but the Rays didn’t show up. 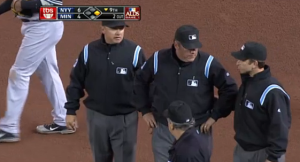 It is to the point where people who are against instant replay sound a lot like people who would insist the world is flat.

They have nothing to back up their claims except tradition and an inability to accept new ideas.

But we saw in the final game between the Padres and Giants how it can be used and again tonight between the Yankees and Twins.

Not an opinion. Not a judgement call. He did it. It was fair. Chalk flew in the air when it hit the line.

The umpire called it foul.
The umpire was incorrect. Again, not an opinion. Not “The Human Element.” He was wrong. And we saw he was wrong INSTANTLY.

Everyone on the planet Earth who was watching the game saw it was wrong. Bruce Bochy and third base coach Tim Flannery argued the call and the umpire stood his ground… which he was wrong about.

Today with 2 outs in the bottom of the 9th of a playoff game, Delmon Young hit a line drive to right field that Greg Golson caught. 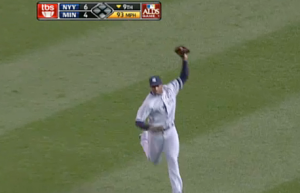 Again… not “In my opinion he caught it.” He did. It was a catch. It was ruled a trap. The Yankees argued.

Then came the great compromise that all people who are (wrongly) against instant replay offer up. “The umpires can get together and confer what they all saw.”

Great! Guess what? They STILL got it wrong. They all huddled up and decided it was a trap… all the while the actual video of the game showed over and over again that he caught the ball.

Which brought the tying run to the plate in the form of Jim Thome.

Now people who are (wrongly) against instant replay will probably throw up the biggest straw man argument right here:

But Sully! In the end it didn’t matter! The Giants won the Game! Mariano got the last out! No harm done!

That’s great… if you know how the future unfolds.

But why should Andres Torres have to try to get another hit when he just got a double?
Why should Mariano Rivera have to get a 4th out against Jim Thome no less when he already got the third out?

You didn’t know the Giants were going to win that game when the umpire blew that call (not an opinion… a fact that was seen by everyone in under a minute.)

You didn’t know Jim Thome was going to make an out when Chris Guccione blew that call. (Any relation to Bob? Not sure.)

The people who keep blathering about “The Human Element” need to answer me this:
Why shouldn’t players be credited for things that they actually do?

I am not talking about robots. I am talking about players who do something positive… and if you are against instant replay, you are actually saying “Players should be credited for their plays at the pleasure of the umpire.”

A rookie named Greg Golson makes a nice catch to end a playoff game. Not an opinion. A fact.

But if you are against instant replay you are saying to him “I don’t think you should be credited with that. Sorry.”

Andres Torres gets a double off of an All Star pitcher, Mat Latos. But instant replay opponents are saying “Tough luck. We simply choose to have you NOT credited with it. No reason.”

Oh and spare me any nonsense of “Jeter doesn’t like it… therefore it is bad.”

Arguments from authority are logical fallacies.
Tim Flannery is for it. He played the game.

Don Denkinger is for it. He could have used it.

So please… opponents of instant replay… here’s my challenge to you:

Make an argument AGAINST instant replay in baseball without stumbling into logical fallacies:

Tell me why getting calls right is wrong.
And tell me why you are against players being credited for what they do.

The next logical reason to NOT have instant replay will be the first one I have ever heard.