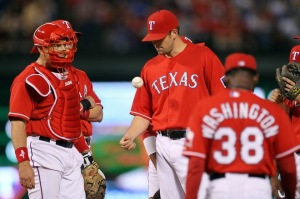 It’s funny. In a strange way, nothing unusual happened tonight.
Sabathia is the Yankees best pitcher and everyone on the planet expected the Yankees to win Game 1.

And they did.
So why does this feel like a watershed moment of devastation for the Rangers?

Because it was all falling into place so wonderfully.
A win in Game 1.
Knocking Sabathia out early.
Taking control of the game and knowing the WORST case scenario had the series tied 1-1 with Cliff Lee on the mound.

Instead… every insecurity the Rangers had is still out there.

They can’t win a playoff game at home.
Their bullpen isn’t up for the task.
They can’t beat the Yankees.
The Yankees are in their heads.

Of course they are.
How else could you explain how they just couldn’t make an out in that 8th?
How Hamilton messed up that base hit?
How Kinsler got picked off?!

And now they have to play a day game after a night game. They have to shake off the fact that they had Game 1 in the bag… just 6 outs to go with 3 runs to play with… and they couldn’t do it.

Now the Yankees have home field advantage and Sabathia is more than rested to go Game 4 if by some miracle the Rangers win Game 2.

The end result in the playoffs is always what matters.
It doesn’t matter if a team wins or loses 10-0 or 11-10. Just win or lose.

But somehow this felt like an exception to that rule.

The Rangers needed this win… and if they had lost 10-0, I have a feeling they could shrug it off. Now they have to wonder… did they spoil their best chance?

I may have to pull out the DeNiro clip from Cop Land.