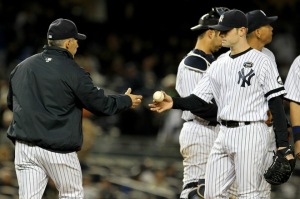 Well there is no doubting who WON the game tonight. Heck, when the announcers start bringing up Sandy Koufax in their comparisons with Cliff Lee, you know you are in good company.

But Andy Pettitte pitched a GREAT game tonight. He deserved better.
I mean he threw 7 solid innings, let up 2 runs, all in the first inning.

Technically he lost the game… but let’s get down to brass tacks. The Yankees BULLPEN lost the game! The Yankees had the top of their order coming up and Ron Washington had to make a tough decision… leave Cliff Lee in with a high pitch count or bring in Feliz?

One 6 run rally later and the only decision left to make in Yankee Stadium was “Should we leave now or walk around and see if anyone left a souvenir cup?”

Seriously… don’t hang this loss on Petttitte. Give it to the group effort of Boone Logan and David Robertson.

It’s a shame that Javier Vazquez wasn’t on the roster. The 8-0 game would have been the ideal time to stick him in there.