Barry threw out the first pitch yesterday afternoon in San Francisco, and no doubt people will fret over it… wondering what message it will send the kids.
Funny, the other night when Andy Pettitte pitched a wonderful game against Cliff Lee, I don’t remember people saying how disgusting it was that he was playing.
He used the stuff.
He followed Clemens from New York to Houston and back again.
He denied it at first, and then after getting caught was hailed as a great man for saying “Yeah I used it… like one time. The fact that I was crossing country back and forth with Clemens was a complete coincidence.”
Nobody seems upset that Alex Rodriguez has been playing this post season… another guy who used it and denied it left and right until he was cornered.
Those guys are playing in the PLAYOFFS.
Is anyone upset that Mark McGwire, the man who could have done so much good if he were honest but decided to not talk about the past, is a hitting coach for a contending Cardinals team and giving players tips? Maybe some pointers… like one to inject into your butt.
Bonds got applause from the fans and threw a ceremonial first pitch.
And the fans know, as I wrote earlier, that Bonds saved baseball in San Francisco… BEFORE his body ballooned up.
The fans were sitting in beautiful AT&T Park, instead of miserable Candlestick Park… or Tropicana Field, because of the excitement that Bonds brought to San Francisco starting in 1993… the year after they almost moved to St. Pete.
Let’s not get carried away over a first pitch, shall we?
For Christsake, they had someone dressed as Captain Morgan throw out the first pitch at some games! It’s not a big deal! 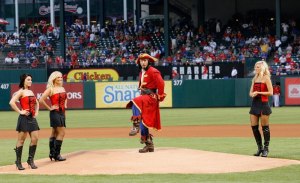 Thought 1: A. J. Burnett wasn’t good.
There will be some defenders of his outing… that he was effective until the 6th inning and that he pitched better than expected.
But let’s get down to brass tacks. It was only his jaw droppingly low expectations that made this game look good by comparison.
6 innings, 5 runs, 6 hits and 3 walks is not a good line. That is a 7.50 ERA.
They needed a quality start. They didn’t get one. 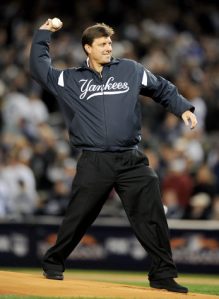 Thought 2: After throwing out the first pitches, Girardi should have seen if Tino Martinez and Bernie Williams could stay in the lineup.
Isn’t the total lack of pop from the Yankees startling? Take away the 5 run outburst in Game 1, and the Yankees have scored 6 runs total in the series. 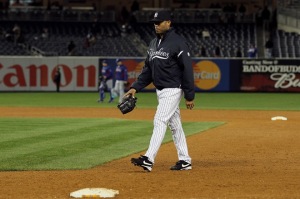 Thought 3: Maybe Mariano Rivera is a better 9th than Sergio Mitre
I could be wrong about that. For the second straight day, the scrubs of the Yankee bullpen let the game get out of hand in the 9th inning while Mariano Rivera sat on a chair, reading Bazooka Joe comics.
I know that Girardi doesn’t want to over use him this post season… He hasn’t thrown a pitch since Friday and has thrown 4 1/3 innings in the last 17 days.
I don’t think he’s worn out.

Thought 4: I think Josh Hamilton’s ribs are fine
If he hits 2 more homers, then he will have hit the most in a post season series history. So much for his swing not being strong.

Thought 5: Speaking of ribs, it looks like Bengie Molina found a good rib joint in Texas
At one point when he had his catchers gear on, his chest protector looked like it was going to pop off like a bad cumberbun.
Like he cares! He can have his cake and evidently eat it all too as long as he keeps crushing 2 out 3 run go ahead homers in the playoffs.

Thought 6: I don’t want to hear Yankee fans complaining about other fan bases leaving before the end of the game
For the second straight night, by the end of the game Yankee Stadium was so empty that it looked like one of those high school tournaments where they play the championship game in a big league park that only has friends and family sitting in the first few rows. 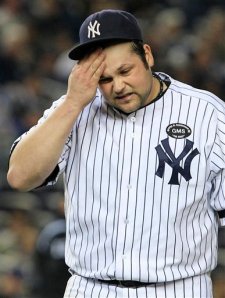 Thought 7: Remember when Joba Chamberlain could have fetched Johan Santana on the trade market?
Could he even be worth a used Santana CD now? 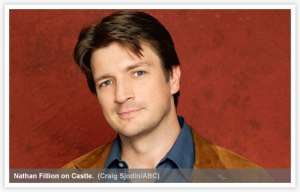 Thought 8: Doesn’t Game 5 starter C. J. Wilson look a little like the dude who plays Castle?
Could be just me.

Thought 9: This isn’t a best of 5 series
This series isn’t over… sure it LOOKS like the Yankees are dead from the neck up.
(Being outscored 25-5 over 3 games including losing by a combined 18-3 at home looks bad.)
But Sabathia isn’t going to have another subpar outing. This series is probably headed back to Texas. And if we’ve learned anything, it is don’t count this Yankee team out.

Thought 10: This isn’t 2004
I had a Yankee friend e mail me saying “This must be what it felt like for you after Game 3 of the 2004 ALCS.” Obviously he’s trying to pump himself up for a big 3-1 comeback.
And they could win… but here’s the big difference:
In 2004, the Yankees were left with Kevin Brown, Javier Vazquez and Esteban Loaiza to pitch Game 7.
The Rangers will have a rested and ready Cliff Lee.
See the difference?
It is subtle. 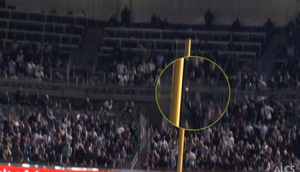 They should be enraged!
Lance Berkman hit a home run! The umpires called it that way on the field… and another one confirmed it.
Umpires make calls and whether they are right or wrong and whether or not we have the technology to make calls correct and reward players for what they actually do and not for what they DON’T do… we should NEVER use that technology.
That’s the HUMAN ELEMENT, right?
So I assume all of you who hate instant replay HATED the fact that the call was reversed, am I right?
You must have been saying “NO! Leave the call WRONG! Baseball is better when calls are wrong!”
(Seriously… someone please send me a logical reason to NOT have instant replay. I’ve been begging for an answer.)