Some word problems were kind of easy.
Like “If you are going to play a football game in a stadium, and the league needs to have 100 yards of playing space, 20 yards of end zone space and six feet on either side beyond the endzone… how big does the playing field have to be?”

Simple addition.
And if the playing space is less than the sum total of space needed, should they play there? 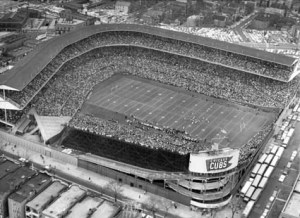 The whole fiasco at Wrigley today is mindboggling. They had no problem playing football for years in Wrigley because they figured out if the field was positioned in a certain direction, there was enough room to play football.

The novel concept of MEASURING was employed.

And the Big 10 sent Northwestern a letter this week about the lack of space? They just figured this out 36 hours ago?

This game wasn’t a surprise! It’s been on the schedule for a while. It’s not like the Northwestern football team knocked on Wrigley Field’s door on Thursday and said “Hey, do you mind if we play here this weekend?”

So figure it out, folks. Hey, when I was a kid, I wanted the Red Sox to play in my front yard. But they couldn’t. Do you know why?