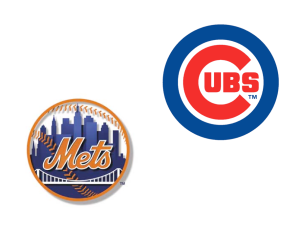 I am currently writing a new post for The Hardball Times where I try to put together a mega trade involving lousy contracts.

I wrote two similar pieces last off season… one where I had a three way trade involving Vernon Wells, Alfonso Soriano and Barry Zito.

The other one was a 9 team 11 player deal that was totally insane… although one part of it DID come true: Carlos Silva was in fact traded for Milton Bradley.

So I was doing the same thing this year… put together a mega trade of insanely bad long term contracts (Zito, Wells and Soriano are still subjects although Wells did have a good year for Toronto.)

And I was going to suggest which expensive short team deals should be swapped. (As I said before, who knows? A change of scenery might be what some of these guys need.)

As I was compiling a list of rotten 2011 contracts, I noticed something.

A lot of them were Met players.

And a lot of them were on the Cubs.

It just goes to show that a big payroll does not always mean a winning product.

The Cubs had the highest payroll in the National League.

The Mets had the third highest payroll in the National League.

Both had losing seasons and were not a factor in any playoff chase.

But guess what, Cubs and Mets fans! A lot of the same players who put on an uninspired yet expensive show for you ARE COMING BACK!

I say let’s shake a few things up.

The worst thing that will happen is they will both have bad teams with big payrolls.

But guess what? That will happen no matter what!

The best thing that could happen is one of the players blossoms in a new environment. Maybe a new coach will give him some good advice. Maybe a player will relax wearing a new uniform without people reminding him how awful his contract is.

Maybe a new player will just fit in well with a different group of guys.

Maybe someone will say “Hey, my contract is running out. I should pull an Adrian Beltre and put together a great season.”

So let’s make the big trade.

So let’s take a look at what each team gets…

If they catch lightning in a bottle, they can get Carlos Beltran playing for one more contract and have the yoke of New York off of his shoulders.

They can get Jason Bay happy to be swinging in a hitters ballpark again.

It is safe to say that Francisco Rodriguez isn’t fitting in with New York. But what if all he needs is a change of scenery?

And Luis Castillo… wouldn’t it be nice to see the guy who hit “The Bartman Ball” in Wrigleyville?

Carlos Zambrano’s time in Chicago might be winding down. Yeah he looked like a good soldier coming back, but anytime a team’s ace needs time away for some sort of anger management, it might be time to change addresses. If he gets his act together he can be a wonderful 1-2 punch with Santana. Or he could beat up new manager Terry Collins. Either way, it would be fun to watch.

Aramis Ramirez has been super injury prone since signing his behemoth of a contract so maybe a change of position would be ideal for him. First base? Left field? Or probably sitting his butt on the bench while on the disabled list.

Kosuke Fukudome hasn’t been the Ichiro type of superstar that the Cubs were hoping for. But he has some pop in his bat and maybe decreased expectations could help. Thanks to Kaz Matsui, there is no way he will ever be the biggest Japanese flop in Mets history. And if he plays badly for the Mets, it’s not like he has a last name that New York fans could turn into an obscene chant.

With Carlos Silva the Mets get a guy who got off to a great start last year before injuries caught up with him. Perhaps he can stay healthy long enough to contribute. After Santana, Pelfrey and Zambrano, he’d be a nice #4 starter.

And John Grabow had a truly rotten year for the Cubs… but he is left handed and can pitch, ergo he is a millionaire several times over.

After the dust settles on this trade, the Cubs would have sent $82.16 million in payroll to the Mets.

The Mets would have sent $87 million in payroll to the Cubs (so the cash makes up the difference.)

And after 2011, all of the players would be off the Mets roster save for Carlos Zambrano who would have one more season at $18 million… so they would have almost $65 million of salaries coming off the books for 2012.

The Cubs? They would be on the hook for Jason Bay, but he could be an ideal fit in that hitters ballpark the way he was in Boston. Meanwhile they’d have $55 million to spend after the 2011 season.

But then again, neither one of these teams seem very good at spending money wisely. Otherwise they wouldn’t have to deal all of these big contracts.

Now for those of you who are wondering why I didn’t include Alfonso Soriano nor Oliver Perez in these deals… well just wait. I am working out two more blockbuster trades that should happen but won’t.

Players WILL be on the move!

At least in my strange parallel universe.

You are going to hear a lot of mixed opinions about Troy Tulowitzki‘s long term contract extension with the Rockies.

Jeff Passan has already chimed in on Yahoo. The panel on MLB Network is split on it. (John Hart pointed out what a no brainer Grady Sizemore‘s super stardom looked like.) And more will come down the pike.

And yes people are pointing to the Rockies rotten contracts for Mike Hampton and Denny Neagle, but those are disingenuous comparisons. They overpaid for them to lure some pitching into Denver and as it turned out, they were both bad fits. (Although Hampton liked the schools and Neagle liked the women in his car.)

You will hear Todd Helton‘s name being thrown around as a lousy contract as well. And I suppose technically it wasn’t a great one. It was an albatross for a bunch of years and by 2006, they would have dealt Helton for flat Diet Sprite. 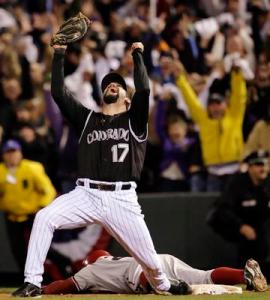 But a very cool thing happened the next year.
The Rockies went on their amazing run and stunned everyone on the planet Earth by sweeping Arizona and storming into the World Series.

And the last out was recorded by Helton.

The Rockies had a bunch of players most fans had never heard of. But they had Helton, who might not have been the superstar he was when he signed his bear of a contract. But he was the steady player whom any baseball fan knew and could relate to Colorado.

And that is something that all the stat heads in the world will NEVER understand. Sometimes for a fan base, it is GOOD to have a steady reliable player that the fan base can point to and say “That’s my guy!”

Helton was that guy on the 2007 Rockies. Who knows? If the Blue Jays make the playoffs, Vernon Wells and HIS brontosaurus of a contract might have a similar reaction to Helton in the ’07 ALCS.

It is why I totally understood the Ryan Howard contract. Lots of people killed it, but I got it. Sometimes you need to put OPS+, VORP, WAR and everything else and put it on the shelf.

Howard the Phillies fan’s guy. He delivered for them with those towering homers in the 2008 World Series and as the 2009 NLCS MVP. He was a World Champion and an MVP for the Phillies… and you don’t have to worry about him going to New York or Chicago or Boston. The long term contract gave the fans license to get attached to him as a Phillie.

And besides, how do you know if an Adrian Gonzalez or whomever else would be able to produce in Philadelphia or be as loved by the fans.

Sometimes to build up a fan base, regular fans need to have fan favorites to root for. Not everyone is watching the game with a calculator in hand. Some people (and brace yourself here) root for the PLAYERS. Some people like having a player to cheer for through thick and thin, and not drop them from their Fantasy Team because their Base Out Win percentage dropped.

Yes it involves emotion, but not all baseball fans are Vulcans!
Some fans have been stung by departing players and want to know if this is a long term relationship or just a fling.

I wonder if the Marlins would have a bigger fan base if some of their World Champions were able to stick around. I wonder if Padres fans would have shown up at the park this year if they felt like the stars they were cheering for would actually come back in 2011.

So guess what Rockies fans… you can buy a Tulowitzki jersey and know it will be good for a while. In the age of free agency, spending 10 seasons in a smaller market is really all you can ask for.

Todd Helton has given Colorado fans 13+ seasons.
Tulowitzki could spend 14+ seasons in Denver if the contract runs through all of its options.

Either way there will be many Rockie fans who could point to Todd and Troy and say “They were MY GUYS.”