Look, I loved Magnum PI like everyone else did. And I LOVE 1980s baseball… so you would think this clip of Magnum at a bar with Tigers greats Alan Trammell and Lou Whitaker would be goosebump worthy for me.

But there’s something about it that doesn’t ring true for me. Watch the clip and we’ll discuss it.

Magnum is such a huge Tigers fan and yet he doesn’t recognize the greatest double play combo in the team’s history?

It’s not like it was Barbaro Garbey, Marty Castillo or Rusty Kuntz in the bar with him.

And why the hell were Trammell and Whitaker in such a lousy bar?

It made Magnum look like an uncool doofus. Sorry, that’s impossible.

While the clip is well intentioned, THIS fan isn’t buying it. 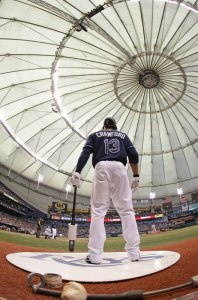 It’s a little better than the Trop.

There is the Green Monster in left rather than those stupid rings in the Trop that you could hit with a flyball.

And oh yeah, they don’t have to literally GIVE tickets away to fill up the place.
I think you’ll like it.

I know trying to sign Crawford away from Tampa, which the Red Sox are evidently trying to do, makes my team as greedy and as vulture like as the Yankees.

And do you know what?
I don’t care!

My team plays for fans who PAID ADMISSION.

That is according to Andrew Baggarly of the San Jose Mercury News, and why would he lie to me?

But it strikes me as an odd move.
Yeah he got a bunch of big homers when he came over to the Giants after being cut by Tampa.

And sure he is a graduate of Bellarmine Prep in San Jose was a local kid who helped the Giants win their first World Series title by the Bay.

But let’s face it, a lot of Pat Burrell‘s production was a burst of power to prove Tampa Bay wrong… then he regressed into being the hitter that the Rays saw fit to cut.

He hit a combined .142 in the post season and went hitless in the World Series.

Hey you fans of sabermetrics… do you know what his OPS was in the World Series?

That’s not his batting average.
That’s the sum total of his slugging percentage and his on base percentage.

And oh yeah, he had to be replaced for defensive reasons.

He struck out 11 times in the 4 games he played in the World Series and frankly looked like a guy who was done.

I thought, as did no doubt everyone else in the Solar System, that the Giants were going to pat Pat the Bat on the butt and say “Thanks for your help, here’s your second World Series ring in three years, good luck.”

Perhaps with his up and down career and having earned nearly $70 million in his career that this could have been the best way to go out… as a champion.

But he found a better way.
Cash another $9 million in checks.

But who am I to judge?

So look forward to a whole season of Pat Burrell playing 6 innings a game and striking out.
It’s good work if you can get it.