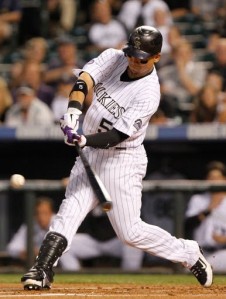 Back in December, I praised the Rockies for signing Troy Tulowitzki to a long term contract, avoiding a free agent nightmare, and making sure that fans throughout this decade in Denver will know who will be at short.

And now with a grand total of one full season in the majors, Carlos Gonzalez will be a Rockie for the next seven years, once again side stepping a free agent bidding war.

No doubt a lot of people (like The Bleacher Report) will kill both of these trades, saying they will be albatrosses on the payroll.

First of all, as I said before, I like signing players that the fan base can get attached to. Baseball has such a reputation of being a sport where the stars all leave the smaller revenue teams. Why not have Tulo or Carlos stick around for a while and give the team an identity?

Secondly, how do we know that the salaries won’t escalate even more? This could be a bargain by the time 2020 comes around!

I remember the Pirates at one point could have resigned Barry Bonds for four years at $16 million… TOTAL.

They balked and later he went to the Giants for five years and $25 million. (Remember when that was a lot of money? Granted, I’ll take it now.)

If the Pirates had ponied up a little money in 1991, they may have had a contender for a few more years instead of blowing the team up after the 1992 NLCS.

Either way, Rockies fans you should be happy. You had one superstar, Todd Helton, play the entire 2000s with your team and will have two other stars, Tulowitzki and Gonzalez play the 2010s at Coors.

Stars you can identify with?
Stars who have already played in the post season?
Stars who are sticking around?
Fans who can attach some emotion to their favorite players?