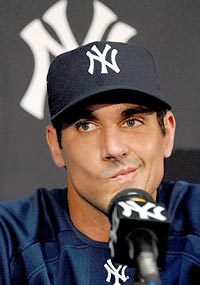 No… that isn’t a headline from The Onion.
The Yankees actually considered bringing back Carl Pavano. Even typing that sentence made me laugh.

This off season for the Yankees, which is been bizarre at best and disastrous at worst, almost entered the realm of the unthinkable.

Imagine me saying this to a Yankee fan right after their team lost the 2010 ALCS:

You aren’t going to get Cliff Lee…
nor Carl Crawford…
nor Zack Grienke…
you will bring back Derek Jeter but he will feel alienated…
you will bring back Mariano Rivera but only after HE called the Red Sox…
Andy Pettitte isn’t signed…
the one big pick up is Rafael Soriano who has had 2 elbow surgeries in the last 5 seasons and is a fly ball pitcher in a home run park…
BUT the good news is they might bring back Carl Pavano.

Brian Cashman might have made a move that even the offices of Bialystock and Bloom would consider to be too self destructive.

Carl Pavano, the man who took Ed Whitson off the hook for most disastrous Yankee free agent signing in George Steinbrenner’s lifetime… the man who was openly mocked by not only the fans and media but HIS OWN TEAMMATES!… was on the Yankees radar.

And for $10 million?
Seriously?

I don’t care if it was for $10 a year for the next million years, that is insane. Did they learn NOTHING from the Javier Vazquez fiasco?

Last season I jokingly egged on Carl Pavano’s agent to call the Yankees and see if they were interested in having him come back.

In my tongue in cheek scenario, I had Brian Cashman hanging up the phone before Pavano’s agent was done with the pitch. Little did I know that reality would be so much MORE absurd!

Lisa Swan at Subway Squawkers as usual hit it on the head by saying this has to do with Cashman “who so apparently so wants to prove that Pavano wasn’t the worst free agent the Yankees ever signed that he’s willing to sign him again.”

This is insane.
What’s next?
Are the Chargers going to reacquire Ryan Leaf?
Is NBC going to return Leno to 10PM?
Will Garth Brooks record another Chris Gaines album?
Battlefield Earth 2?
How about the Knicks keeping Isiah Thomas on the payroll?

Wait, that last one is real?