John Farrell is having a hard enough time watching his Blue Jays fall behind 2-0 in the first inning.

Does he REALLY have to be so close to the Yahoo in the Bruins jersey and old school Red Sox hat?

I mean he can lean right over and say “If you pitch to Papi without a shift you ahhhh totally re-tah-ded.”

“Thanks for the tip.”

In the wake of the Bryan Stow tragedy, the Dodgers are pulling out all of the stops. They had a bad ass press conference at Chavez Ravine, brought out a legion of cop cars and the police, led by Chief Charlie Beck, promised “a sea of blue… not Dodger blue.”

There will be added police protection. The poorly lit parts of the parking lot will be lit.
There will be no tolerance for punks, agreeing with the sentiments of my video.

A new leaf has been turned over. And the police have assured us that this security will be in place until the end of the series.

Wait what? The SEASON, right? Not the series with the Cardinals.

Nope.
Until the end of the Cardinals series, and then they will evaluate what they need to do.

Um… didn’t they just do that? They need increased security, light the dark areas of the parking lot and throw out people who cause trouble.

There, I just did your evaluation. Do what you are doing.

The problem isn’t a Cardinals series. (Are there a lot of rowdy Missourians showing up to Los Angeles?) It is the drunk punks who make the experience unpleasant for so many people. So make it a place where they can NOT be drunk punks and people can feel good about going there with their families.

So what is really going on here?

I’ll tell you. The Dodgers are going on a diet.

Trust me, I know about diets. I’ve been struggling with my weight since I was a zygote. I’ve lost weight. I’ve put it back on. And when I make the vow to lose weight, I make a big show of it. I avoid bread. I eat my fruit. I work out hard.

I drop pounds. I feel good. I listen to the Rocky soundtrack.

Then I sneak a cookie.
Then I have something I should have for dinner. “I’ve been good.”

Then I have a sandwich.

Then I sneak something at the Supermarket sample tray.

Then I say “Why yes, I will have that brownie deep fried!”

Next thing you know I’ve put on more weight than when the diet began.

My “After” picture looks worse than my “Before” picture.

It is the weeks and months afterward that are hard. And it makes me wonder what are the Dodgers really doing here?

Did you catch that? It is a PERCEPTION that Dodger Stadium is not safe, so let’s change the perception.

Let’s not change the reality. Make it SEEM safer. Put on a show. The attention is on the Dodgers and they need to create the perception that it is safer. And soon there will be a new story to distract everyone… and like me sneaking a cookie, it will be back to the way it was.

And yet there will be the image of Charlie Beck talking tough.
The show will be made… and the Dodgers wouldn’t have to spend money on security.

The Dodgers are a big market club. They can afford to throw millions at players. Do the same for the experience of going to Dodger Stadium. And not for one series and not noodle around in a committee. You think you are in a bad financial position now? Wait until families stop showing up.

MLB, let’s cut to the chase and take control of this team from the McCourts before this fiasco continues. One of the flagship franchises in the game is being run into the ground with no regard for the product they put on the field nor the safety of their fans.

And that is MY perception.

Now if you will excuse me, I am going to avoid this cookie. 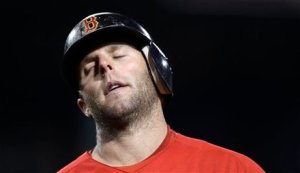 Oh I am not saying I am happy with this start. It is embarrassing. At this point in the season winning only 2 series would be lousy.

That is pathetic. The Red Sox are the worst team in baseball. They are 10% of the way to a 100 loss season. They look dead from the neck up. They give away games like tonight. It’s their worst start EVER.

And yet I am not worried yet.

Partially because I am not because there are 150 games left. The Sox are only 8% of the way through the season.

And partially because no AL East team is running away from it. The Yankees and Blue Jays are barely over .500. The Orioles are at dead even and the Rays have 8 losses of their own.

Sure 10 losses stink but they only have to make up 5 games… over 5 1/2 months.
That is doable. I will take one modest winning streak to make the Sox within just a game or two from the leader.

April 5 – 3-1 loss in Cleveland. (The Sox drop their 4th straight as the bats are dead in Cleveland.)
April 7 – 1-0 loss in Cleveland. (Sox blow a great Lester performance on a squeeze bunt and Darnell McDonald overrunning the bag to end the game.)
April 12 – 3-2 loss to Tampa Bay. (A solid Lester performance is wasted as Kyle Farnsworth of all people shuts down the Sox.)
April 15 – 7-6 loss to Toronto. (Bobby Jenks implodes with a 4 run seventh inning as the Red Sox waste Pedroia and Youkilis homers and a clutch RBI double by Scuatro.