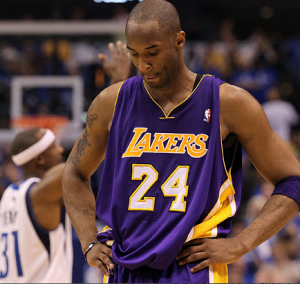 There are so many wonderful things about this Lakers collapse, I can’t pick what is the best part.

– The Lakers are a loss away from a monumental face plant and doing it because the team is imploding from within.

– The Lakers are a loss away from having Phil Jackson’s career end with a whimper. Red Auerbach’s coaching career ended with the 1966 NBA Title. See the difference?

– The Lakers are a loss away from forever ending any talk of Kobe Bryant being on the same level as Michael Jordan. Kobe is a great player. A Hall of Famer. But would Jordan be swept out of the playoffs like this?

– The Lakers are a loss on Sunday away from making last Wednesday’s 93-81 fiasco their last home game of the year. That would mean the last game Phil Jackson coached at home, the Lakers got booed by the remaining fans in Staples at the end of the game.

– The Lakers call in show on 710 ESPN are filled with fans complaining about refs calls and intense denial. Schadenfreude is fun.

– Because the Lakers are down 0-3 in the series, there is talk about how no NBA team has ever come back from that. But guess what other team they brought up? What other team came back from an 0-3 hole? I’ll give you a hint… they don’t bring up the 2010 Philadelphia Flyers.

That’s right. My 2004 Red Sox! So I get to hear about Laker misery and how they probably won’t match Red Sox heroics.

It doesn’t get any better than that!

A big market team was coming off a season where they improbably missed the playoffs. They spent big on players in the off season, shockingly signing one free agent that seemed to be heading to a different playoff bound team.

People started bitching and moaning how it wasn’t fair that they signed all of these great players but made the team the prohibitive pick going into the season.

Then things started going badly. They stumbled out of the gate, lost some embarrassing games and were a losing team in May. The team just didn’t seem to fit together. And the biggest superstar looked like a post steroid shell of his former self. People seemed to take great pleasure in pointing out that they were a great group of players but not a TEAM. 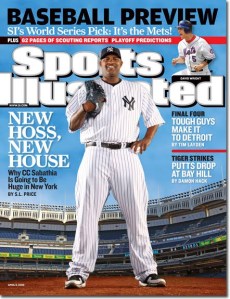 Remember how the Yankees stubbed their toe out of the gate after picking up Mark Teixiera, CC Sabathia and A. J. Burnett? They had missed the 2008 playoffs and the new pick ups didn’t look like they were going to help. The A-Rod steroid mess was the embarrassment of the off season. The new Yankee Stadium looked like a huge mistake and as late as May 13 they were on the wrong side of .500.

It took one positive stretch to put the Yankees back on track and by the end of the year they won their first World Series title in 9 years. (And which everyone reacted “They win it EVERY year!”)

So yeah, the Red Sox look out of sorts right now. Carl Crawford looks rotten now. The bats go dead one day, the pitching stinks the next.

The Red Sox look as out of sync as a Godzilla movie or an Italian Hercules film. But once thinks click, the Sox will go on a nice run and make all of us forget these bad first few weeks.

There’s a lot of season left.
Just get in sync.

The Mets and Dodgers are playing in the ballpark that is a shrine to the history and legacy of the Dodgers: CitiField.

The two teams from the two biggest markets are squaring off. And at this point they are both sub .500 teams with outrageous financial issues.

Let me put it this way:
The Mets could lose up to $100 million over the last two seasons and are involved in one of the great financial scandals of our age… and they are the STABLE one of the two teams.

As Frank McCourt is gearing up for a spectacular flame out, the Dodgers might not even reach payroll for June.

So when you have two expensive bad teams, what can you expect to happen later in the year?

So take a look at the talent on display. If you want someone, make an offer.
One team could use a lower payroll every 2 weeks and the other team has already thrown good money after bad in the Oliver Perez/Luis Castillo fiasco.

Make your bids. These teams will look a LOT different on August 1 after the trade deadline!