In the latest Sully Baseball video, I borderline beg Cleveland fans to avoid watching the NBA playoffs and pay attention to the young Indians team that just happens to be in first playoffs…
As always, the video is shot, co written and directed by my wonderful wife, Lisa.
Enjoy the video. 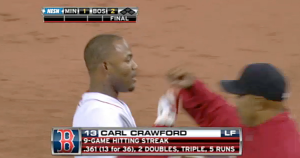 Remember how crappy Carl Crawford started the season?
Remember how he batted in 10 different spots in the first 9 games? I will have to double check my work, but that seems right.
And here we are with hitting up a storm including a walk off hit.
Maybe signing Crawford WASN’T a mistake.
Maybe Josh Beckett can continue to dominate.
One thing I DO know:
It’s time to update the tally.
DODGED BULLET GAMES – 8

May 9 – 2-1 win against the Twins. (A bullpen breakdown cost Beckett the decision but Cark Crawford ended the game with an 11th inning walk off hit.)
TEETH GRINDER GAMES – 11

April 5 – 3-1 loss in Cleveland. (The Sox drop their 4th straight as the bats are dead in Cleveland.)
April 7 – 1-0 loss in Cleveland. (Sox blow a great Lester performance on a squeeze bunt and Darnell McDonald overrunning the bag to end the game.)
April 12 – 3-2 loss to Tampa Bay. (A solid Lester performance is wasted as Kyle Farnsworth of all people shuts down the Sox.)
April 15 – 7-6 loss to Toronto. (Bobby Jenks implodes with a 4 run seventh inning as the Red Sox waste Pedroia and Youkilis homers and a clutch RBI double by Scuatro.
April 19 – 5-0 loss in Oakland. (Pedroia gets picke doff, the Sox bats go dead and waste a solid Lackey start.)
April 26 – 4-1 loss in Baltimore. (Buchholz pitches tentatively and the Sox let Kevin Gregg of all people to close out the 9th.)
April 27 – 5-4 loss in Baltimore. (The Sox tie the game with a 3 run 8th only to have Bard lose it in the bottom of the 8th.)
April 29 – 5-4 loss to Mariners. (Bobby Jenks blows a 7th inning lead, wasting 2 Mike Cameron homers.)
April 30 – 2-0 loss to Mariners. (The Sox strand 11 runnerss and let Milton Bradley double home the go ahead run.)
May 4 – 5-3 loss to Angels. (7 hours with rain delays and stranded runners. Marco Scutaro was thrown out at the plate in the 12th)
Down to -3.
We’ll see what the new month will get us.