Jorge Posada is batting 7th.
He is batting ahead of Brett Gardner, who has a .341 average and .818 OPS in May is being dropped in the order in favor of someone who is batting sub .170, has 2 extra basehits in the month and who whined his way out of the lineup in a nationally televised game.

This isn’t over, folks. Girardi and Cashman’s authority is being undermined and there are clearly two camps being set up… are you in favor of trying to win NOW or do you think we should continue to honor the past?

Right now it is clear that you can NOT dishonor the aging superstars, even if it means putting an inferior lineup on the field.

This is going to get interesting, folks.

These are the kind of games that can turn around a season.
Down 6-0, everything was dead for the Sox and suddenly everything went right.

OK, Dice-K was awful, but once the 6th inning start unfolding (or unraveling for the Orioles) there was an aura that the Sox were going to somehow pull this out.

And then Kevin Gregg helped make it so.

The Red Sox have a winning record for the first time all year, and they are doing it while the Yankees are losing games and their identity.

The Red Sox who were the laughing stock of baseball in April are now only 3 games out of first place with about 75% of the season left to play. They are hitting… they can pitch…

It might not be such a bad summer after all.

May 9 – 2-1 win against the Twins. (A bullpen breakdown cost Beckett the decision but Cark Crawford ended the game with an 11th inning walk off hit.)
May 13 – 5-4 win in the Bronx. (Youkilis homers off of Joba and Bard and Papelbon make it more interesting than it needed to be.)
May 15 – 7-5 win in the Bronx. (Sox fall behind 4-1 but come back as Youk, Papi and Salty all homer.)
May 16 – 8-7 win against the Orioles. (Down 6-0 after 6 innings, the Sox rally and win it with a 2 run walk off double by Adrian Gonzalez)
TEETH GRINDER GAMES – 12

April 5 – 3-1 loss in Cleveland. (The Sox drop their 4th straight as the bats are dead in Cleveland.)
April 7 – 1-0 loss in Cleveland. (Sox blow a great Lester performance on a squeeze bunt and Darnell McDonald overrunning the bag to end the game.)
April 12 – 3-2 loss to Tampa Bay. (A solid Lester performance is wasted as Kyle Farnsworth of all people shuts down the Sox.)
April 15 – 7-6 loss to Toronto. (Bobby Jenks implodes with a 4 run seventh inning as the Red Sox waste Pedroia and Youkilis homers and a clutch RBI double by Scuatro.
April 19 – 5-0 loss in Oakland. (Pedroia gets picke doff, the Sox bats go dead and waste a solid Lackey start.)
April 26 – 4-1 loss in Baltimore. (Buchholz pitches tentatively and the Sox let Kevin Gregg of all people to close out the 9th.)
April 27 – 5-4 loss in Baltimore. (The Sox tie the game with a 3 run 8th only to have Bard lose it in the bottom of the 8th.)
April 29 – 5-4 loss to Mariners. (Bobby Jenks blows a 7th inning lead, wasting 2 Mike Cameron homers.)
April 30 – 2-0 loss to Mariners. (The Sox strand 11 runnerss and let Milton Bradley double home the go ahead run.)
May 4 – 5-3 loss to Angels. (7 hours with rain delays and stranded runners. Marco Scutaro was thrown out at the plate in the 12th)
May 10 – 7-6 loss in Toronto. (8th and 9th inning heroics, including a homer by Adrian Gonzalez, are undone by a walk off sacrifice fly by David Cooper.)

Doesn’t the 0-6 start seem like it was a long time ago? 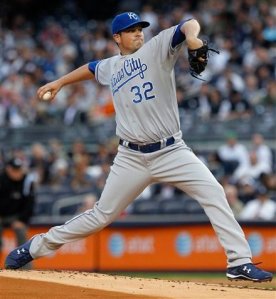 If you DO have Vin Mazzaro on your fantasy team, I hope you benched him for tonight’s game against Cleveland.

He let up 14 runs in 2 1/3 innings against the Indians.
You’d think that after 12, they would have someone warming up.

Either way, that is the kind of outing that could mess up your head to head stats.
Just saying.