Carl Crawford entered today’s game with the Tigers batting .229 and still being mentioned as one of the biggest busts of the year.

Now after back to back 4 hit games, the OPS has soared about .600 and he is getting closer to being the hitter everyone thought the Sox were getting.

And oh yeah, have you noticed that since his bat has woken up, the Red Sox have been winning… a LOT?

In fact as I type this, the Red Sox are in a virtual tie for first place with the Yankees, 2 percentage points behind them and 1 game back in the loss column.

A lot has to do with MISTER TWO FORTY FOUR!

The Giants lost their young budding superstar catcher Buster Posey to injuries for the rest of the season? Naturally the Mets shortstop should take his place.

I do not literally mean take Posey’s position of course. The Giants need to fill the catcher’s position but that is a short order. Eli Whiteside is a capable catcher and Bengie Molina, the man who Buster Posey made expendable, can be signed as a free agent. Both can split time behind the plate and call a good game. Maybe even Fresno’s Jackson Williams can catch a few games for the parent club.

Getting someone to squat and tell the pitchers what to throw is not an issue. His bat will be sorely missed. A team this offensively challenged can’t afford to simply remove Posey from the lineup. The combination of Molina, Whiteside and Williams can’t make up for his production.

But Jose Reyes can.

The Mets shortstop is healthy and contributing in the lineup. He leads the league in hits and triples. He has 17 steals and his OPS is in the .800s. And he is doing it in a miserable situation. If he could do that in the poisonous Mets culture, imagine how he could flourish in the positive environment of the defending World Champions!

The Mets are imploding, sinking in the standings, infighting with the management and selling off chunks of the team.

When a team is trying to find new investors (or maybe a new owner) and losing tens of millions of dollars, wouldn’t it behoove them to start cutting payroll? Especially when the team is a losing team in an empty stadium. Hell, Wilpon has already said his team stinks. Why not start dumping the bodies?

If the Mets can get two good prospects for Reyes, whose contract expires at the end of the season, then it makes sense for them. Getting two players who have already passed much of the minor league gauntlet might be a surer bet than the two draft picks the Mets would get after Reyes’ inevitable free agent departure. (Why would he want to come back to the Amazin’ Mess.)

The Giants are in a position to trade from strength. It is always risky to deal pitching, but with a rotation of Linecum, Cain, Bumgarner, Sanchez and even Vogelsong, the Giants have depth in the rotation. Wilson, Ramirez, Lopez, Romo and Mota give them the deep bullpen. If ANY team can trade a pitching prospect or two, it is the Giants.

Maybe dealing top prospect Zack Wheeler would be a stretch. And maybe lefty reliever Alex Hinshaw, who has some big league experience, might not be enticing. But first baseman prospect Brandon Belt could be intriguing for the Mets. 23 year old control artist Eric Surkamp could be spared. And slick fielding young shortstop Brandon Crawford won’t be needed. I am sure a package could be slapped together.

And it could even be easier if the Giants ever agreed to take on any more of the Mets payroll. Jason Bay is owed $35 million over the next two years. Johan Santana is owed $50 million. Send one of those contracts to China Basin and the accountants in Queens would be much obliged. Granted, the only stadium worse for Jason Bay’s talents than CitiField is AT&T Park. But imagine if Santana comes back to form? But I digress. This discussion is about Jose Reyes.

And the Giants have a spot waiting for him. Sorry, Miguel Tejada. The experiment to capture lightning in a bottle again after the post season success of Edgar Renteria and Juan Uribe simply isn’t happening for the 2011 Giants infield. The bat speed is not there. The power is not there. The range is not there. He is aging the way 37 year olds USED to age.

Replace the lumbering Tejada with the spark plug of Reyes, rejuvenated after his parole from Queens and suddenly the Giants line up is a little more electric. He has gap to gap power and can stretch doubles into triples, making San Francisco the ideal park for his offense.

And playing for a potential post season run could not hurt his free agent prospects.

Deal a little of tomorrow for a chance to repeat today, Giants. You don’t need a catcher who can hit. You need a player who can hit.

Make the call. The Mets are DYING to shed some payroll. 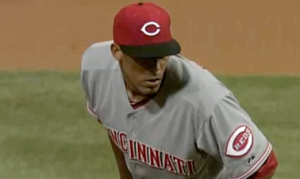 The Phillies wound up beating the Reds in 19… and I want to talk about one of the pitchers of record.

Everyone is talking about Wilson Valdez and his win out of the bullpen. Yeah, it is great and cool that a utility infielder got the win as a pitcher.

But about about some love for Reds pitcher Carlos Fisher?
Can you imagine how frustrated he must feel tonight?

He wasn’t expected to pitch tonight. The Reds looked like they had a win in the 10th inning.

Instead it went on… and in the 14th inning Fisher came into the game and batted in Ramon Hernandez’s 6th spot with reserve catcher Ryan Hanigan coming in.

Valdez seemed hell bent on winning the game. Little did he know he would be CREDITED with the win.

Meanwhile, despite Fisher keeping the Reds in the game, Cincy couldn’t push a run across the board.

And they couldn’t even score when Valdez was one the mound… a move by Phillies manager Charlie Manuel that literally says “It’s worth more for us to lose this game than to wear down our pen.”

Valdez was the human white flag.
And the Reds couldn’t score off of him.

Finally he let up a game winning sacrifice fly, giving him line of 5 2/3 Innings pitched and 1 run.

It was the longest outing of his career. (Only once in his 60 previous games had he gone even 4 innings.)

He pitched his heart and guts out.
And for his troubles, he got the loss. It is first decision of the season.

You deserved better, Carlos.
Please accept this blog post as a consolation prize.