I took my family to the Los Angeles Zoo today. Please enjoy the picture of me with the hippos. (I’m on the left.)

At one point I checked my phone and I saw it was 2-2 in the Red Sox and A’s game.

Then a quick trip the the kangaroos and koalas and I checked it again.

I could relax. All was well. By the time I reached the giraffes, I checked my phone. I just like to see that little (F) next to the score.

Then I saw the A’s had a lead while we were looking at the elephants.
I had no clue what was happening in the game. All I know is that I was acting like a chimp in front of the chimps. 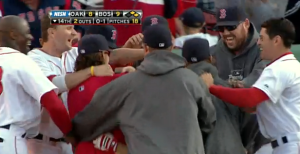 Well eventually, around the time we were by the otters, I saw the (F) I was looking for. The Sox won in 14 innings.

Evidently J. D. Drew won it, but in the end it doesn’t matter.

A win is a win. Series won are series won.

But any more games like that and I’LL be the caged animal!

May 9 – 2-1 win against the Twins. (A bullpen breakdown cost Beckett the decision but Cark Crawford ended the game with an 11th inning walk off hit.)
May 13 – 5-4 win in the Bronx. (Youkilis homers off of Joba and Bard and Papelbon make it more interesting than it needed to be.)
May 15 – 7-5 win in the Bronx. (Sox fall behind 4-1 but come back as Youk, Papi and Salty all homer.)
May 16 – 8-7 win against the Orioles. (Down 6-0 after 6 innings, the Sox rally and win it with a 2 run walk off double by Adrian Gonzalez)
May 18 – 1-0 win against Detroit. (With 2 outs in the 8th, Salty doubles home Crawford from first for the only run. Papelbon gets himself in and out of 9th inning trouble.)
May 19 – 4-3 win against Detroit. (Bard blows Beckett’s lead but Carl Crawford wins it with a walk off hit.)
May 24 – 4-2 win in Cleveland. (Varitek throws two runners out and homers as the Red Sox win their first game against the Indians.)
May 29 – 4-3 win in Detroit. (The Red Sox blow an early 3-0 lead but David Ortiz wins the game with a pinch 9th inning homer.)
June 3 – 8-6 win against Oakland. (Buchholz lets up 4 runs in the first but the Sox come back thanks to Carl Crawford’s 2 run single.)
June 4 – 9-8 win against Oakland. (Red Sox blow a 4 run 9th inning lead and trail in the 11th before Ellsbury ties it and Drew wins it in 14.)
TEETH GRINDER GAMES – 16

April 5 – 3-1 loss in Cleveland. (The Sox drop their 4th straight as the bats are dead in Cleveland.)
April 7 – 1-0 loss in Cleveland. (Sox blow a great Lester performance on a squeeze bunt and Darnell McDonald overrunning the bag to end the game.)
April 12 – 3-2 loss to Tampa Bay. (A solid Lester performance is wasted as Kyle Farnsworth of all people shuts down the Sox.)
April 15 – 7-6 loss to Toronto. (Bobby Jenks implodes with a 4 run seventh inning as the Red Sox waste Pedroia and Youkilis homers and a clutch RBI double by Scuatro.
April 19 – 5-0 loss in Oakland. (Pedroia gets picked off, the Sox bats go dead and waste a solid Lackey start.)
April 26 – 4-1 loss in Baltimore. (Buchholz pitches tentatively and the Sox let Kevin Gregg of all people to close out the 9th.)
April 27 – 5-4 loss in Baltimore. (The Sox tie the game with a 3 run 8th only to have Bard lose it in the bottom of the 8th.)
April 29 – 5-4 loss to Mariners. (Bobby Jenks blows a 7th inning lead, wasting 2 Mike Cameron homers.)
April 30 – 2-0 loss to Mariners. (The Sox strand 11 runners and let Milton Bradley double home the go ahead run.)
May 4 – 5-3 loss to Angels. (7 hours with rain delays and stranded runners. Marco Scutaro was thrown out at the plate in the 12th)
May 10 – 7-6 loss in Toronto. (8th and 9th inning heroics, including a homer by Adrian Gonzalez, are undone by a walk off sacrifice fly by David Cooper.)
May 21 – 9-3 loss to Cubs. (Up 3-1 in the 8th inning, the bullpen and defense implode. The Cubs score 8 runs while both teams wear their 1918 uniforms.)
May 23– 3-2 loss in Cleveland. (The Sox blow a 2-1 8th inning lead when the Indians rally with 2 outs. Crawford ends the game on a double play.)
May 29 – 3-0 loss in Detroit. (Verlander keeps the Sox off base and prevents the sweep.)
June 1 – 7-4 loss to White Sox. (Konerko drives in three, spoiling a game tying Ortiz homer.)

Go for the sweep tomorrow.
Maybe I should go to the aquarium for that. 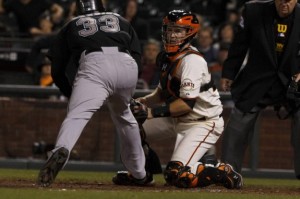 I basically made a video love letter to them this off season.

I am raising one of my sons as a Giants fan.

I would love to see them win the West and the NL Pennant again. And short of a Red Sox – Giants World Series, wouldn’t mind seeing them repeating.

But the reaction of the Scott Cousins collision is getting to be absurd.

Yes. It was a devastating injury. I get it.
Yes. I understand the Giants lineup isn’t deep enough to withstand a loss like this.

But a lot of Giant fans are crossing a strange and frankly annoying line.

Some of my friends have posted this picture where they are studying the trajectory of Scott Cousins path to the plate.

They are literally being some sort of a half assed Jim Garrison with this analysis.

I keep waiting for a friend of mine to insist there was a second slider and Scott Cousins was just a patsy.

Yes it sucks that Posey got hurt. I don’t think a bang – bang play at the plate in extra innings was part of a conspiracy.

Which brings me to Brian Sabean. It’s one thing for some drunk knucklehead to call the collision premeditated and cause for retribution. It’s another thing when the General Manager of the Giants does it on the record.

In the wake of the stupid violence that went on against a Giants fan this year, isn’t it ironic that the call of retribution came FROM the Giants’ front office?

The injury last week put a damper on the year long love fest that has been the Giants World Series defense. But virtually EVERYTHING went right last year… this is some adversity.

The main thing is to fix the roster now and get a player who can replace Posey behind the plate and another bat. Now I wonder whose job that is…

SABEAN! So quit putting vendettas out there and do your damn job! Being the loon who claims collisions at the plate are “malicious” and the rest of the nonsense that foamed out of your mouth on KNBR might not exactly put you at a strong position to negotiate with other teams.

You better hope you don’t have to make a deal with the Marlins!
Act like you’ve been there before, because YOU HAVE!

And finally a message to some other Giant fans…

Then there are my many Giant fan friends who can’t stop bringing it up in mid conversation.

Remember how Lily Taylor kept writing songs about the boyfriend who dumped her in the movie Say Anything? Everyone was just super annoyed that she couldn’t shut up about the guy.

That’s what a lot of Giants fans are turning into.
The first few days. OK. But how long is this going to go on? The rest of the year?

Do you want to know the best revenge?
Winning.

And guess what the Giants are doing?
Winning.

They are the first place Giants. They’ve had a few dramatic wins in just the last few days. They are getting contributions from rookie Brandon Crawford and big power behind Cody Ross and Aubrey Huff.

And look at the Division they play in. The Dodgers are a joke. The Padres are rebuilding. Do you REALLY think the Diamondbacks are going to do this all year? And so far, the Giants have won 6 of 9 against Colorado and they go after them again today.

Even with NO Posey, the Giants have as good a shot as any team in the National League to win the pennant with the exception of Philadelphia. And guess what? The Phillies are not invincible.

Put the Giants staff in a short series against the Marlins? The Braves? The Rockies? The Reds? The Brewers? The Cardinals? Wouldn’t you pick the Giants every time? 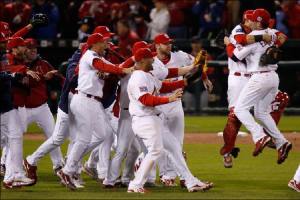 And speaking of the Cardinals, remember 2006?

They not only lost Mark Mulder but they lost their closer Jason Isringhausen before the playoffs. They had to slap together a playoff staff that included rejects (recently released Jeff Weaver) and untested rookies like Adam Wainwright.

Did they whine? Did they bitch and moan?

Nope.
They shut their mouth, injected their HGH and won the Damn World Series.

Take a page from that Giants.
Say “Yeah that sucked… but guess what? We’re going to win anyway.”

Because right now? You are bordering on Miss Havisham‘s territory.

Yeah that’s right. I made a Charles Dickens reference in a baseball post.

And I have great expectations myself for this Giants team (see what I did?)

Your team is the defending champion.
Your team’s name is the Giants.

Right now Giants fans, you are acting like neither a champion nor a giant.

Look, I know it is 2011 and what anyone does behind closed doors is their business.
And I think the whole “players should fraternize before or after a game” sentiment is a little dated.

But do I really want my closer in a shower with the right fielder of the Yankees?
I mean they are talking casually so they can hear each other so maybe they are just in a locker room.

Or maybe they are doing a Skype call.
The lighting shows that Papelbon is in the Heat Miser’s lair while Swisher is in the ice castle of Snow Miser.

I hope the next one they are in a jacuzzi together.