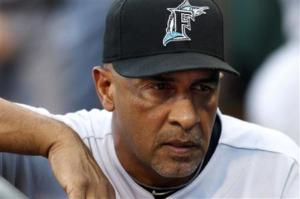 Seriously Edwin… I hope you don’t think you have job security!
Marlins owner Jeffrey Loria is a little quick with the trigger finger when it comes to showing managers the door.

It worked in 2003 when he dumped his buddy Jeff Torborg and brought in ancient Jack McKeon. The result was the 2003 World Series title.

Since then? Well Joe Girardi had the team in contention despite a microscopic payroll in 2006… and was fired.

Your predecessor Fredi Gonzalez led the Marlins to back to back winning seasons despite the leagues lowest payroll… and was fired.

You? You have one of the most talented Marlins rosters in their history. Expectations are high.
The Marlins were tied with the Phillies in the loss column on May 26th.

Since then the fish had flopped, losing 12 of their next 15 games including a nice big fat 8 game losing streak.

Better start winning, Edwin.
Joe and Fredi got jobs… but their resume was a little bit better.