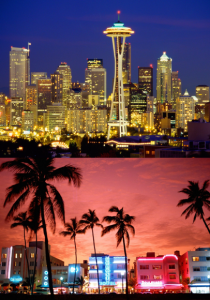 So the Marlins had to abandon their own stadium for the weekend because U2 needed time to set up their concert.

Actually that’s not a true. The Marlins stadium isn’t ready until next year. So they are just borrowing the Dolphins’ stadium as they have every year since 1993.

(I can’t keep track of what it is called. Is it Joe Robbie? Pro Player? Landshark? Sun Life? Chico Bail Bonds Park?)

I admit the economics make sense. U2 is going to draw a hell of a lot more people than the Mariners/Marlins game, so Bono, the Edge and company need the time to set up. (I really hope they aren’t doing any of that Spider-Man stuff.)

But does the location shift make sense?
Sure they can’t play in Miami, but did they HAVE to go 3,287 miles to find another venue?

After all, they are the FLORIDA Marlins!
Couldn’t they play a weekend in a smaller Florida city?

The Wide World of Sports complex in Orlando is available.

There is no game in Bradenton, Clearwater, Jupiter, Fort Myers or Dunedin today.
The Jacksonville Suns are out of town this weekend.

Perhaps there could be a novelty of a Major League game being played in a smaller town. Maybe instead of a 2/3 empty Safeco Field in Seattle hosting an impromptu game where the Mariners wear their road grays, maybe have a smaller Florida town become a big league city for a day.

Wouldn’t that make more sense?
Of course it would… that’s why it isn’t happening.