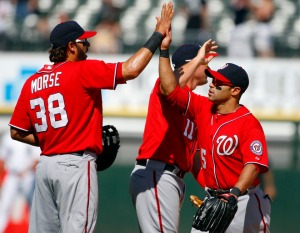 The Nationals have had a hell of a week.
They swept the Mariners in a dramatic series at home in DC. And the euphoria of that series lasted about a nanosecond as Jim Riggleman, he of a career of mediocrity, suddenly felt he was entitled to an in season contract negotiation.

Say what you want about Riggleman and I have nothing personal against the man, but he quit on the team.

And off they went to Chicago where interim manager John McLaren was promptly thrown out in HIS first game. (The team was running out of managers.)

Friday night’s game was one of the wildest and strangest regular season games you will ever see as the White Sox kept tying the game on the brink of losing. And yet the National never quit despite blowing several late leads and won it in the 14th.

After a loss yesterday they were losing late before Danny Espinosa homered in the 7th and the Nats held on to a 2-1 win.

Instead they showed some guts and not only stayed above .500 but are now just 3 games in the loss column out of a playoff spot.

Davey Johnson, a man who was ACTUALLY screwed by two organizations after leading the Reds and Orioles to the LCS and getting let go, is getting into a good situation:

Their old manager did, but not the team.